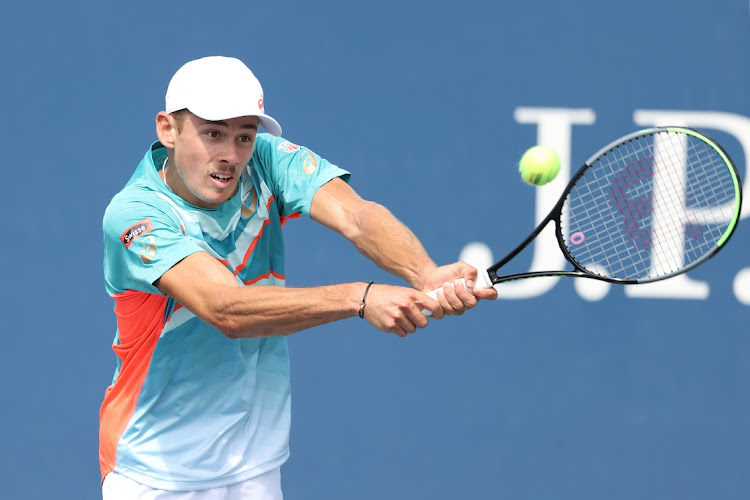 Alex de Minaur of Australia tested positive for Covid-19 prior to his departure for the Games, becoming the latest athlete to have the virus shatter his Olympics dream.
Image: Al Bello

A Nigerian delegate to the Olympics became the first visitor to the Tokyo Games admitted to hospital with Covid-19, broadcaster TV Asahi said on Friday, as Japan battles to stem rising local infections a week before the event.

The individual, a non-athlete in their 60s, tested positive on Thursday evening at the airport with mild symptoms but was hospitalised because of age and pre-existing conditions, the broadcaster said, without giving details.

On Friday, the Australian Olympic Committee said that tennis player Alex de Minaur, ranked 15th in the world, had tested positive prior to his departure for the Games, becoming the latest athlete to have the virus shatter his Olympics dream.

"He said that he's shattered, not being able to come ... but he has sent his very best wishes for the rest of the team."

De Minaur returned two positive tests in Spain before he was due to fly to Japan, David Hughes, the AOC's chief medical officer, told a news conference.

Another Olympic dream crushed was that of U.S. basketball star Bradley Beal, after USA Basketball said on Thursday the Washington Wizards star would miss the Games after entering coronavirus protocols at a training camp in Las Vegas.

The coronavirus has infected several athletes and others involved with the Games, which start on July 23, even as infections spread in Tokyo and experts warn worse may lie ahead.

On Friday, top government spokesman Katsunobu Kato, told a news conference that a Ugandan athlete had gone missing, with police and the team's host city in western Japan mounting a search.

Public broadcaster NHK said the athlete was a weightlifter, whose absence from a PCR test had been spotted by an official of the host city, Izumisano, in Osaka prefecture.

Although a state of emergency has been clamped on Tokyo for the pandemic, most measures to limit its spread are voluntary and many say they have grown weary of them.

Organisers have promised that the Games, postponed from last year because of the pandemic, will be "safe and secure".

They have imposed strict testing and limits on delegates' activities to try to soothe the concern of the Japanese public, many of whom wanted the Games cancelled or postponed again.

Covid-19 at the Olympics : Athlete tests positive for Covid-19 in Tokyo quarantine

An Olympic athlete under a 14-day quarantine period has tested positive for the new coronavirus in Tokyo, the organising committees' website reported ...
Sport
2 months ago

International Olympic Committee President Thomas Bach said on Thursday there was "zero" risk of Games participants infecting Japanese with COVID-19, as infections hit a six-month high in the host city.

However, Japanese Olympic gold medalist turned chief of the Japan Sports Agency, Koji Murofushi, told Reuters on Friday that organisers needed flexibility and swift decision-making in reacting to the spread.

"It's possible that even after the Olympics start, there will be situations where we'll need to add measures to prevent the spread of infections - and if that's the case, we have to be flexible enough to act swiftly," said Murofushi, 46, a gold and bronze medalist in the hammer throw.

Most venues are to have no spectators, with officials urging the public to stay home and watch on television, depriving Japan of its hopes of pomp and spectacle at the Games.

Bach had suggested to Prime Minister Yoshihide Suga that if the virus situation improved spectators could be let into stadiums, media said.

Asked about the report, Tokyo Governor Yuriko Koike told reporters that while many hoped children at least could see the Games in person, it would depend on the trend in infections.

On Friday Bach visited Hiroshima, the first city to suffer an atomic bombing, to deliver what organisers have called a message of peace on the first day of an "Olympic Truce", an ancient tradition to cease hostilities during the Games.

Bach laid a wreath at the Hiroshima Peace Memorial Park cenotaph and called the Games a "beacon of hope" for a peaceful future.

But the visit has proved controversial, with some critics charging the IOC with using it as a publicity stunt and others worried about contagion.

Although Japan has escaped the explosive outbreaks of other nations, it has more than 820,000 cases and about 15,000 deaths. Host city Tokyo had 1,308 new cases on Thursday and another 1,271 on Friday.

The city's monitoring committee has warned that if the pace of contagion picked up as people move around and new infectious variants spread, the seven-day moving average could nearly double to 2,406 in four weeks.

That would approach the highest level yet seen in the pandemic.

Japan's fitful vaccination campaign has also sparked frustration among the local authorities handling most of it. Momentum gained after a slow start was soon blunted by supply shortages and just 31% of people have had at least one doses.

The Blitzboks have all been released from quarantine with the sole exception of one person on the management team‚ SA team management said in a ...
Sport
2 months ago

A coronavirus cluster at a Japanese hotel where dozens of Brazilian Olympic team members are staying has raised new concern about infections at what ...
Sport
2 months ago

Will Lebogang Shange walk his way to the Olympics or not? There is confusion hanging over his inclusion in the SA Olympic squad after having tested ...
Sport
2 months ago
Next Article