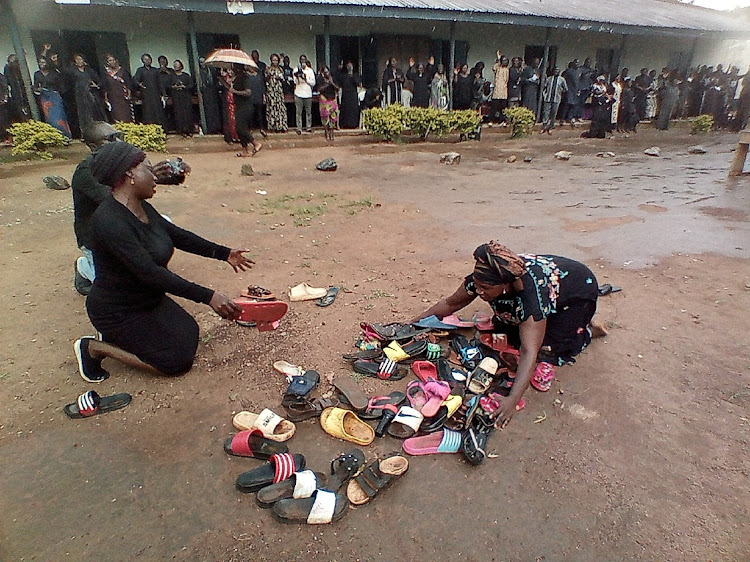 Parents of students abducted at Bethel Baptist High School pray for their safe return around discarded shoes left behind by the children, in Kaduna, Nigeria on July 9, 2021.
Image: REUTERS/Bosan Yakusak

Six students and two officials who were kidnapped last month from a school in Nigeria's Kaduna state were released after relatives paid ransom money, a school official and parent said on Friday.

Kidnappings by armed men, commonly referred to in Nigeria as "bandits", have become endemic in northern Nigeria, disrupting the education of hundreds of thousands of children.

Gunmen attacked the main campus of the Nuhu Bamalli Polytechnic in Kaduna on June 10 and took students and staff members, in the process killing one student.

The college's spokesman Abdullahi Shehu, said the students and officials were released late on Thursday at an undisclosed location.

They "regained their freedom after their parents and relatives negotiated with the bandits", Shehu told Reuters, but declined to say whether negotiations involved paying a ransom.

A parent whose child was kidnapped said parents and relatives of the students negotiated with the gunmen and paid ransom money.

"I am not in position to tell you how much we contributed and paid. That is not necessary. The most important thing is that we have secured their freedom, period," Saminu Bala, one of the parents of the freed students, said.

At least 10 institutions have been hit by kidnappers and around 1,000 students and staff abducted since December.

Yusuf Lado had not yet learned to read or write when his school closed for fear of attacks by armed gangs, which have been snatching students across ...
News
10 months ago

Kidnappers who abducted more than 100 students from a boarding school in Nigeria's Kaduna state warned that the children could starve unless parents ...
News
10 months ago

Nigeria's parliament passed a $2.4 billion supplementary budget on Wednesday to address rising insecurity in the country and fund COVID-19 vaccines.
News
10 months ago
Next Article