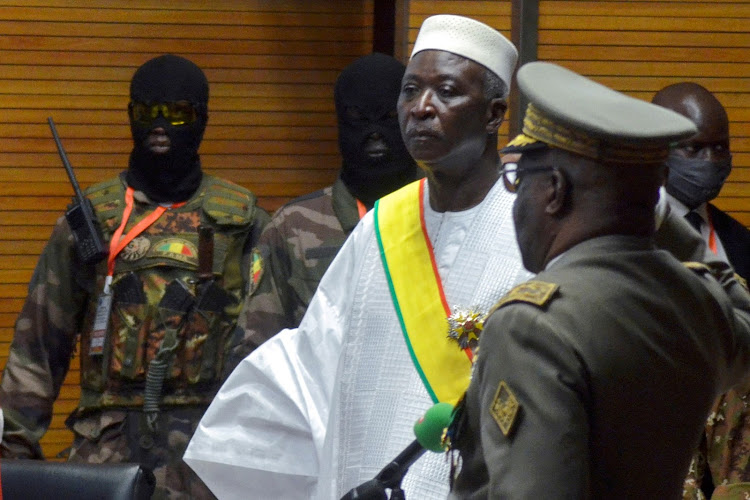 Interim Mali president Bah N'Daw is sworn in during the inauguration ceremony in Bamako on Tuesday.
Image: REUTERS/Amadou Keita

Mali's interim president and prime minister resigned on Wednesday, two days after they were arrested by the military, an aide to the vice president said, deepening a political crisis and potentially setting up a standoff with international powers.

President Bah Ndaw and Prime Minister Moctar Ouane were taken to a military base outside the capital on Monday after a Cabinet reshuffle in which two officers lost their posts.

The intervention led by Vice President Assimi Goita has jeopardised Mali's transition back to democracy after a coup in August overthrew former President Ibrahim Boubacar Keita. The United Nations Security Council has added its voice to a chorus of international condemnation amid fears a political crisis in Bamako could affect regional security.

Goita, a colonel, also orchestrated last year's coup. He has promised that elections planned for next year will go ahead.

"The president and his prime minister have resigned. Negotiations are ongoing for their liberation and the formation of a new government," said Baba Cisse, an aide to Goita, in comments sent by the military to Reuters.

The UN Security Council met privately on Wednesday over Mali and in a statement called for the safe, immediate and unconditional release of all the officials detained.

The 15-member council "affirmed that imposing a change of transitional leadership by force, including through forced resignations, is unacceptable."

Goita has defended his actions, saying the president and prime minister had violated the transitional charter by failing to consult him about the new Cabinet.

He also accused the government of mishandling social tensions in Mali, including a strike by the main union.

France, the European Union and the United States have threatened to impose targeted sanctions over what French President Emmanuel Macron has termed "a coup within a coup".

On Wednesday, the US State Department suspended assistance to Mali's security and defence forces, called for the release of the detainees and the resumption of the civilian-led transition.

Cisse told reporters the two leaders would be released but not immediately, due to security considerations.

Their resignations coincided with a visit by an Economic Community of West African States (ECOWAS) delegation to press the military to back down.

The delegation, led by former Nigerian President Goodluck Jonathan, has also raised the possibility of sanctions against the officers responsible for the takeover, according to a military official present at meetings this week in Bamako.

It is not clear if ECOWAS will be satisfied with a replacement president and prime minister, or if it will insist on Ndaw and Ouane being reinstated. ECOWAS and other powers wants a civilian-led transition to democracy to continue.

ECOWAS imposed sanctions, including border closures, on Mali after the coup in August before lifting them when Goita's junta agreed to an 18-month, civilian-led transition.

Mali's neighbours and international powers fear the crisis could further destabilise a country that Islamist groups linked to al Qaeda and Islamic State have used as a launchpad for attacks across the region.

West African officials were on Tuesday heading for Mali, plunged into crisis after the military detained the president, prime minister and defence ...
News
1 year ago

Military officers in Mali detained the president, prime minister and defence minister of the interim government on Monday, deepening political chaos ...
News
1 year ago
Next Article