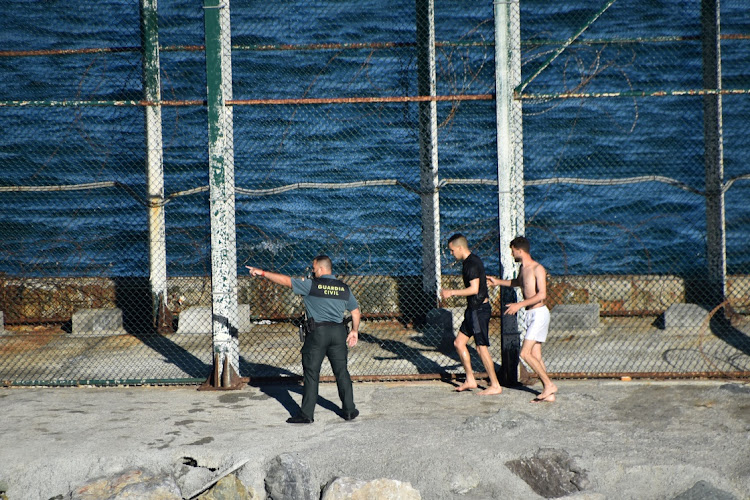 Two migrants walk after crossing the Spanish-Moroccan border in the presence of a Spanish civil guard in Ceuta, Spain, May 17, 2021. Morocco and Spain are clamping down on immigrants.
Image: REDUAN BEN ZAKOUOR/EL FARO DE CE

Spain expelled more migrants from its small North African enclave Ceuta on Wednesday and neighbouring Morocco also tightened security after thousands had climbed or swum round a border fence in a mass push for Europe.

Spanish police and soldiers escorted people through a gate back into Morocco, enabling the return of more than two-thirds of the roughly 8,000 migrants who entered Ceuta in the past two days, the interior ministry in Madrid said.

On their side, Moroccan police drove hundreds of young men away from the border fence and stopped others from approaching.

Clothed and some with young children, the Moroccans and other mainly sub-Saharan Africans had swum a few hundred metres or clambered over the roughly six-metre metal fence to enter Ceuta, which has long been a magnet for migrants.

"We were given juice and a cake that is all," said one migrant, who gave his name as Mohamed from Ait Melloul in southwest Morocco, after Spanish soldiers sent him back as soon as he arrived.

"The lucky ones are those who have their relatives to host them in Ceuta," he added, from the Moroccan border town of Fnideq, where returnees were gathering but said they were receiving no aid.

Ceuta's leader Juan Jesus Vivas has accused Rabat of initially failing to patrol its side of the border properly, possibly in retaliation for Spain's discreet admission of a Western Sahara independence leader for hospital treatment.

'WHAT DID SPAIN EXPECT?'

"What did Spain expect from Morocco, which sees its neighbour hosting the head of a group that took up arms against the kingdom?" he said in a Facebook post.

"Morocco has the right to lean back and stretch its legs."

Madrid said it had taken a humanitarian decision to allow in Ghali, whose movement seeks independence for Moroccan-run Western Sahara.

In a further development, Spain's high court summoned Ghali to appear on June 1 for a preliminary hearing in a war crimes case against him, a court document seen by Reuters showed.

Ghali declined to sign it, the document said, and a source close to the investigation said he might seek to claim diplomatic immunity under an Algerian passport.

Spain's Prime Minister Pedro Sanchez told parliament that the government was handing over people who had entered Ceuta irregularly, but he did not link events there to Ghali's situation, calling Morocco a friend of Spain.

Nevertheless, Rabat recalled its ambassador to Madrid for consultations, said a senior Moroccan diplomatic source who declined to be named, adding that relations with Spain needed a moment of "contemplation". Moroccan authorities did not respond to requests for comment.

Ceuta, with a population of 80,000, is on the northern tip of Morocco across from Gibraltar. Reuters TV footage showed hundreds of teenage migrants there being processed at a warehouse where Red Cross officials gave out food and drink.

Two Spanish journalists were killed after an armed ambush on an anti-poaching patrol in Burkina Faso, Spain's prime minister said on Tuesday.
News
8 months ago

Portugal to quarantine travellers from South Africa via other countries

Portugal said on Saturday that passengers arriving from South Africa via a stopover in another country must also quarantine for 14 days and present a ...
News
10 months ago
Next Article