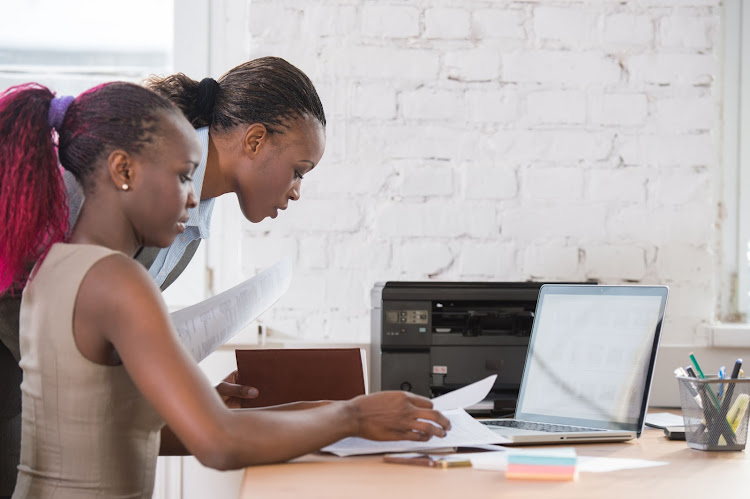 From the United States to Britain, Black and ethnic minorities have suffered disproportionately high rates of illness, death and income loss during the pandemic.
Image: 123RF/HASLOO

Unable to get a bank loan when she moved from Nigeria to the United States, Abbey Wemimo's mother was forced to borrow money at a 400% interest rate and pawn her wedding ring to pay his college fees.

Today, 12 years on, Wemimo runs a fintech company which aims to tackle the yawning racial wealth gap in the United States - a divide exacerbated by the Covid-19 pandemic.

"We set up our company because we believe that where you come from, the colour of your skin and your financial identity, or credit score, should not determine where you end up in life in the wealthiest nation on earth," Wemimo said.

"The pandemic is a wake-up call. It gives us a great opportunity to level the playing field," he told the Thomson Reuters Foundation.

His company Esusu, co-founded with business partner Samir Goel, is a social enterprise – a business that aims to help change the world for the better.

On Tuesday, social entrepreneurs and funders gather online for the Skoll World Forum, an annual global conference exploring innovative solutions towards building a fairer future that comes after more than a year of societal and economic chaos.

Esusu's aim is to help people on low incomes gain a credit score, allowing them to access the U.S. financial system and escape crippling debt cycles.

It does this by partnering with landlords and public housing authorities to capture tenants' rental payment data which it sends to major credit bureaus.

Some 45 million Americans have no recognised credit score, according to government data, blocking them from accessing bank loans or mortgages, and limiting employment and housing options.

Wemimo said someone forced to rely on payday lenders could rack up $250,000 in interest payments over a lifetime.

Nearly 80% of Esusu users are Black or ethnic minorities.

SA is planning to accelerate the implementation of the Township and Rural Entrepreneurship Programme, to bring more people into the mainstream ...
News
10 months ago

A long history of financial and housing discrimination in the United States has created a huge racial wealth gap.

"The average white family has 10 times as much wealth as the average Black family in this country, and 76% of that wealth is baked in home ownership," Wemimo said.

"I have no issues with the capitalist system, but we live in a society where the racial wealth gap continues to widen so we're advocating for a new kind of capitalism. We call ourselves justice capitalists."

Wemimo said Esusu was a win-win for landlords and tenants alike. Landlords pay $2 per property per month, but see an average 25% increase in prompt rent payments from tenants keen to build their credit score.

The platform currently captures data on one million properties across 43 states.

From the United States to Britain, Black and ethnic minorities have suffered disproportionately high rates of illness, death and income loss during the pandemic.

"I wanted to put the needs of communities of colour first because historically we've been overlooked and under-resourced. We see this as racial justice work," Edwards said.

Amid warnings of a silent mental health crisis fuelled by the pandemic and lockdowns, MindRight user numbers have doubled since March 2020.

"We've seen more isolation, a lot of loneliness and a lot of anxiety related to financial stress," Edwards said.

Nthabeleng Likotsi was raised by a business-oriented family in Botshabelo in the Free State, where her parents ran a uniforms manufacturing ...
Business
9 months ago

Unlike crisis hotlines, MindRight's coaches check in with users daily, reaching them on both their good and bad days.

Edwards said the app overcomes traditional barriers faced by young people of colour in accessing mental health help, including stigma, cost and the lack of therapists of colour who understand their culture and experiences.

She said the Covid-19 crisis had made people more aware of racial inequality, but also exacerbated economic, social and health disparities.

"I think the pandemic has really exposed just how far we have to go," she added.

In Britain, Black-led social enterprises say they have been "in the eye of the storm" during the crisis.

It has seen an influx of people who have lost jobs, others unable to work because of lockdown, and migrants who have lost work but who cannot access benefits.

Up to 86% of users are non-white British.

Jerry During co-founded Money A+E in 2011 after noticing people from Black and minority backgrounds were not using existing advice services due to shame, embarrassment and a lack of trust.

He employs advisers from diverse ethnic backgrounds, many with personal experience of debt, including former clients.

During's passion for tackling debt and poverty is rooted in his own childhood when his father lost his job.

"We had bailiffs coming to the door, we had the threat of losing our home, there was lots of strife, my parents nearly broke up. It was a really stressful period," he said.

With a national moratorium on evictions imposed during the pandemic set to end soon, During warned of a "cliff edge" and called for a longterm holistic approach to addressing poverty.

Many of Britain's social enterprises have found themselves on the frontline during the crisis, providing low income families with meals, helping children access online lessons during school closures, and boosting vaccine take-up.

But Black-led social enterprises have long struggled to access the same level of funding as other organisations, and many were in danger of folding when COVID-19 hit.

The Black Lives Matter protests - coinciding with the pandemic's exposure of racial inequity - has since helped spark a wave of investment on both sides of the Atlantic from corporations, philanthropists, foundations and other donors.

"Black people are finally being heard. There has been a reckoning," said Bayo Adelaja, founder of UK-based Black empowerment social enterprise Do It Now Now.

"It's rather trendy right now to support Black people. But anything could happen in the future. Ring-fencing is crucial."