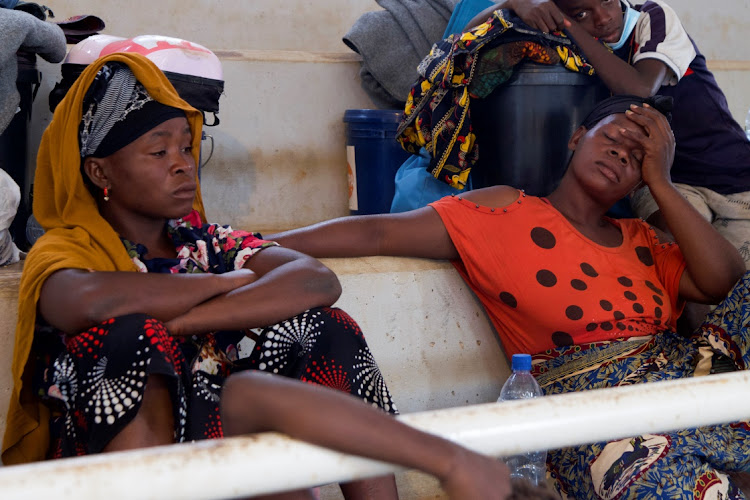 Women sit inside a displacement centre after fleeing an attack claimed by Islamic State-linked insurgents on the town of Palma, in Pemba, Mozambique, on April 2 2021.
Image: REUTERS/Emidio Jozine

Mozambique is sending a medical team to identify the bodies of 12 people beheaded during an Islamic State attack last month on the northern gas exploration hub of Palma, an army spokesperson said.

A police official and an army spokesman said the victims appeared to be foreigners, although this has not been confirmed.

Palma, adjacent to gas projects worth around $60bn (about R872bn) and a base for foreign companies, was the target of an attack by insurgents that began on March 24.

A local police chief told TVM earlier this week that on returning to the town following the assault, he had helped bury 12 beheaded bodies. While he could not identify their nationalities, he said he believed they were foreign because they were white.

In comments to state broadcaster TVM on Thursday, army spokesperson Chongo Vidigal confirmed the victims were white but said their nationalities could not be confirmed due to the decomposed state of the bodies. The army had sent a medical team to identify them, he said.

"It is urgent that a team arrives to establish these small details," he said, adding it was uncertain when they would arrive.

Twelve people, possibly foreigners, were found beheaded following an Islamic State-claimed attack on the northern Mozambique town of Palma, near ...
News
1 year ago

The bodies were found near the Amarula Hotel, where a large group of both locals and expatriate workers took refuge for days during the attack before attempting to escape in a convoy of vehicles on March 26 that ran into an ambush.

Seven people in the convoy were killed, including a British man and a South African. Both their bodies have already been removed from Palma.

The government has said dozens died in the attack and aid groups believe tens of thousands have been displaced. But the full scale of the casualties and displacement remains unclear.

Islamic State-linked insurgents have been increasingly active since 2017 in Mozambique's northern Cabo Delgado province where Palma is located.

Mozambique is about 26% Roman Catholic, 31% other Christian, and 18% Muslim, according to government figures. Cabo Delgado is one of only a few provinces that have a Muslim majority.

Regional leaders from countries including SA, Zimbabwe and Botswana met in Mozambique's capital Maputo this week to weigh a response to the insurgency.

Mozambique's foreign minister Veronica Macamo Dlhovo said the leaders resolved to send a mission to Mozambique this month to assess the threat and how they could help.

Zimbabwe's President Emmerson Mnangagwa said the leaders agreed a regional force should be revived immediately so it could intervene.

The insurgency is a rapidly growing threat to Mozambique after a few years of relative peace for the country. A long civil war followed the end of the independence struggle against colonial power Portugal in 1975, lasting until 1992.

A low-level conflict broke out again pitting the Frelimo government against its longtime Renamo rivals until a 2019 peace accord, although low-level attacks continued.

Mozambique remains one of Africa's poorest and and most underdeveloped countries despite the potential of its natural resources.

The Southern African Development Community (SADC) will hold a two-day extraordinary Troika Summit in Maputo from Thursday to Friday to deliberate on ...
News
1 year ago

'We have already attended to the issue of evacuating those South Africans who are stranded in Mozambique,' Ramphosa said.
News
1 year ago
Next Article