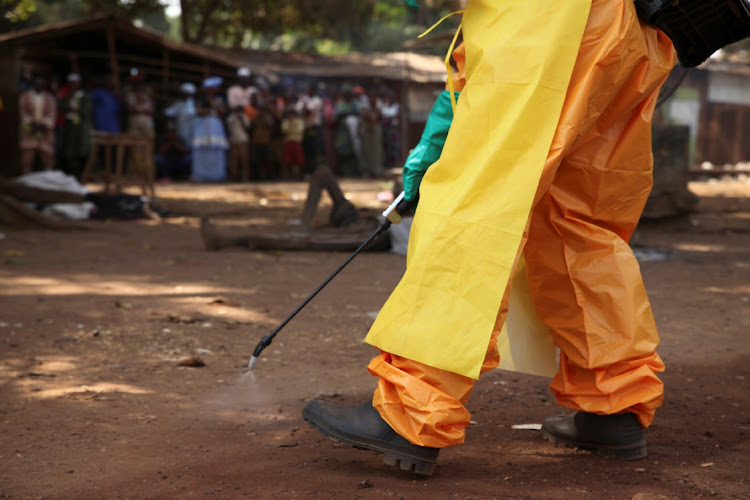 A member of the French Red Cross disinfects the area around a motionless person suspected of carrying the Ebola virus as a crowd gathers in Forecariah, Guinea on January 30, 2015.
Image: REUTERS/Misha Hussain/File Photo

Medics in Guinea were on Friday racing to track down suspected carriers of the Ebola virus, after they fled a southeastern town where the country's first case in nearly a month was detected the previous day.

"This illustrates the need for enhanced monitoring in the (local) ...region, but also in other regions ...to contain this new cluster as soon as possible," he told Reuters.

After the case was diagnosed, some residents initially barricaded roads into the town, denying access to response teams who were now searching for other suspected Ebola cases who had fled, local officials said.

The case in Soulouta, less than 20 kilometers (12 miles) from where an ongoing Ebola outbreak began in February, reset a count that had begun last week to declaring the country free of the virus.

Guinea's current Ebola outbreak is likely to have been sparked by a latent infection in the human population from the last outbreak rather than from ...
News
1 year ago

A total of 15 people have tested positive for Ebola and nine have died during the current outbreak. It marked the first resurgence of the virus in Guinea since its deadliest epidemic, which killed more than 11,000 people in Guinea, Liberia and Sierra Leone between 2013 and 2016.

An Ebola outbreak is typically declared over once 42 days have passed following a second negative test of blood samples from the last confirmed case.

Guinea began a vaccination campaign to contain the spread of the virus, which causes severe bleeding and organ failure and is spread through contact with body fluids, at the end of February.

The WHO said in March that the February resurgence is likely to have been sparked by a latent infection in the human population from the last Ebola outbreak rather than from the virus jumping the species barrier again.

The CDC has issued new public health requirements for U.S. visitors who have recently been in the Democratic Republic of the Congo (DRC) or Guinea ...
News
1 year ago

Ebola outbreaks in Africa must be stopped, White House says

The Biden administration on Tuesday said everything possible must be done to stop Ebola outbreaks in the African nations of Guinea and Democratic ...
News
1 year ago

WHO has alerted six African countries after Ebola outbreaks

The World Health Organization has alerted six countries to watch out for potential Ebola cases after fresh outbreaks in Guinea and Democratic ...
News
1 year ago
Next Article