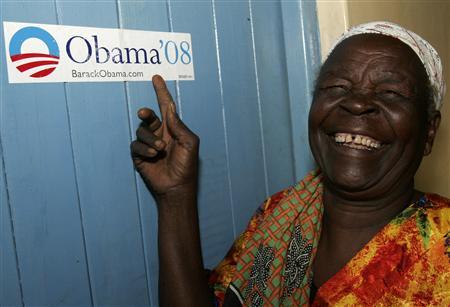 President Uhuru Kenyatta said in a statement: “The passing away of Mama Sarah is a big blow to our nation. We've lost a strong, virtuous woman. A matriarch who held together the Obama family and was an icon of family values.”

The Kenyan leader added she would be remembered by many for her philanthropic work especially in her Nyang'oma Kogelo home in Siaya county, where she initiated several community development projects.

“She was a loving and celebrated philanthropist who graciously shared the little she had with the less fortunate in her community.”

She was the third wife of Barack Obama's paternal grandfather, said the president.

The Times of London reported she met Obama on his first visit to Kenya in 1987. She said that she realised immediately he was special and “praised God” that he had been able to have such a good education.

Obama's father, also Barack Obama, died in a car crash in 1982. He had left Kenya on a scholarship to Hawaii, where he met Obama jnr's mother. He later left his wife and two-year-old son and returned to Kenya. The Times said Obama saw his father only once more, several years later.