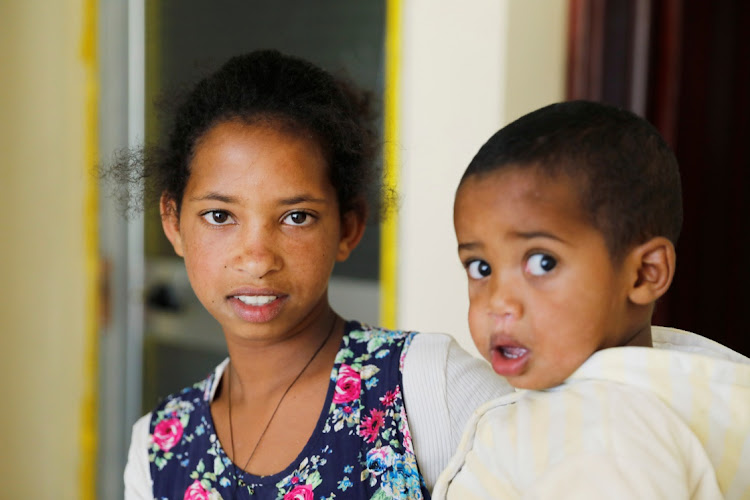 Mibrak Esayus, who says her parents were killed by Eritrean soldiers, holds one of her five siblings at a temporary house, Tigray region, Ethiopia, March 13, 2021.Picture taken on March 13, 2021.
Image: REUTERS/Baz Ratner

Fourteen-year-old Mibrak Esayus recalls the day last November when she says Eritrean soldiers burst into her home in Ethiopia's Tigray region and killed her mother and father.

It was 10 days into Ethiopia's military campaign against fighters from the Tigray People's Liberation Front (TPLF), the region's former ruling party, following their surprise assault on federal army bases in Tigray.

The family heard shooting outside their home in the town of Zalambessa, on the border with Eritrea, from around dawn, Mibrak said. Eritrean soldiers burst in around midday.

Her father, a priest at the local Ethiopian Orthodox church, begged them "Don't shoot," she told Reuters.

"They shot him in the chest with three bullets ... Then they shot my mama in her back."

Mibrak said she was shot in the thigh as her five younger siblings, aged from one to 12 years old, screamed in terror. The soldiers yelled at them to be quiet, setting a haystack alight as they left, she said.

Eritrea has agreed to withdraw troops from Ethiopian territory along their mutual border, Ethiopia's prime minister said on Friday.
News
9 months ago

Mibrak is among more than two dozen civilians in Tigray who told Reuters they had been victims of, or witnesses to, shootings, gang rapes and looting by Eritrean soldiers.

Reuters verified parts of Mibrak's account with her aunt and uncle, now caring for her and her five siblings; through her medical records at a hospital in Adigrat, the nearest major city; and with parishioners from her father's church who said they attended her parents' memorial service.

Ethiopia's Prime Minister Abiy Ahmed, who has faced mounting international pressure to address reports of human rights abuses during the conflict in Tigray, said on Friday that Eritrea had agreed to withdraw troops from the region.

Asked about the accounts of killings and abuses by Eritrean soldiers, including those in Zalambessa, Eritrea's information minister Yemane Gebremeskel said by text message that it was not "in our military tradition to kill civilians."

Ethiopia and Eritrea have called reports of atrocities by Eritrean soldiers overblown, although Abiy, who acknowledged for the first time this week that Eritrean forces had crossed into Tigray during the fighting, said on Tuesday that his government had raised the issue of atrocities with Eritrea. He did not disclose with whom.

Yemane did not respond to requests for comment on Abiy's announcement of an Eritrean troop withdrawal. He told Reuters on Tuesday that he believed Abiy's speech that day had been mistranslated but did not respond to queries over which part.

Speaking to Reuters in her aunt's two-room apartment, Mibrak said she hid her brothers and sisters under a bed during the fighting. She said they stayed there for two days without food, water or electricity. It felt safer, she said, and they did not have to see their parents' bodies.

When the fighting subsided, she sent the four older children to relatives and took herself and the baby to Adigrat hospital, 36 km (22 miles) further south, where they stayed for more than two months.

Her medical records, seen by Reuters, show that she was shot in the thigh and the wound was infected.

The bishop of Adigrat, Abune Merha Kiristos, showed Reuters handwritten lists with the names of 1,151 people he said priests had reported killed in surrounding areas since the conflict began, including Mibrak's parents. Some parishes were still not accessible to priests, he said.

Mibrak's aunt retrieved a picture of her younger brother and his wife. A moustachioed young man in a blue suit draped in a priest's white robes stands beside a serious young woman.

"Don't show the children, they will start to cry," she said, sliding the photo across the table face down. "Mibrak holds it and cries at night."

Eritrea has agreed to withdraw troops from Ethiopian territory along their mutual border, Ethiopia's prime minister said on Friday.
News
9 months ago

Amnesty International accused Eritrean forces on Friday of killing hundreds of civilians in northern Ethiopia over 24 hours last year, an incident it ...
News
10 months ago
Next Article