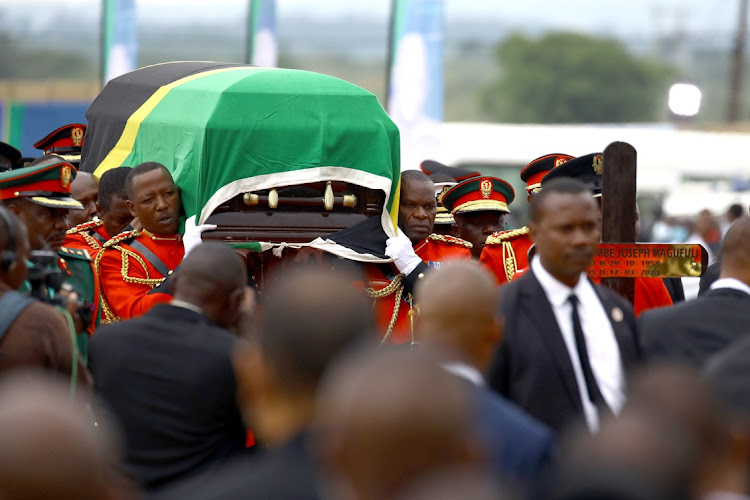 Magufuli was interred in a family cemetery in the village of Chato near the shores of Lake Victoria.

Nicknamed the 'bulldozer' for driving through policies against resistance, Magufuli was reviled by the opposition for what it said were brutal crackdowns on political adversaries.

Samia Suluhu Hassan, the former vice president sworn in as Magufuli's successor, lauded him as "our hero" whose principle of hard work would be central to her leadership.

"I want to assure you that we will keep all his promises that are in our ... party's manifesto and also the promises he made to his people," Hassan, Tanzania's first female head of state, said in a televised service held in a stadium.

Magufuli stirred controversy by playing down the threat of COVID-19 and refusing to order measures widely adopted across the world like mask-wearing and lockdowns.

Magufuli disappeared from public view on February 27, sparking speculation he was suffering from COVID-19. Officials dismissed the rumours, insisting he was healthy.

On March 17, however, Hassan announced Magufuli had died of a heart disease that he had battled for years.

Analysts are keen to see whether Hassan will take measures like mandating mask wearing or ordering vaccines to try to halt the spread of the pandemic. During the requiem mass however most of the attendees, including Hassan herself, did not wear masks.

Magufuli’s death was announced by his vice-president Samiah Suluhu Hassan on Wednesday after he was not seen in public for two weeks.
News
10 months ago