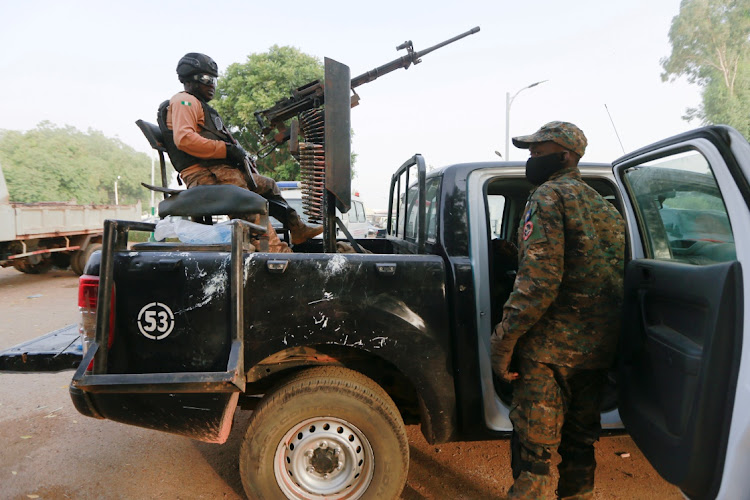 A soldier sits on one of the trucks used to bring back the girls who were kidnapped from a boarding school in the northwest Nigerian state of Zamfara, following their release in Zamfara, Nigeria, March 2, 2021.
Image: AFOLABI SOTUNDE

Nine more students than originally thought are missing after gunmen stormed a forestry college in northwest Nigeria earlier this week, a government official in Nigeria's Kaduna state said on Saturday.

The revision brings the total number of missing students to 39 following Thursday's nighttime raid on the Federal College of Forestry Mechanization, the fourth mass school abduction in northern Nigeria since December.

"The Kaduna state government is maintaining close communication with the management of the college as efforts are sustained by security agencies towards the tracking of the missing students," Aruwan said.

Gunmen in the northwest Nigerian state of Kaduna kidnapped around 30 students overnight from a forestry college near a military academy, the state's ...
News
1 year ago

The armed gang broke into the school in Kaduna state, located on the outskirts of Kaduna city near a military academy, at around 11:30 p.m. (2230 GMT) on Thursday.

Aruwan said on Friday that the army rescued 180 people after a distress call in the early morning hours.

Kaduna city is the capital of Kaduna state, part of a region where attacks by gangs of armed men, referred to as bandits, have festered for years.

Military and police attempts to tackle the gangs have had little success, while many worry that state authorities are making the situation worse by letting kidnappers go unpunished, paying them off or providing incentives.

Unidentified gunmen abducted 27 students and some staff and their family members in an attack overnight on a secondary school in Nigeria's Niger ...
News
1 year ago

Gunmen have freed all 279 girls kidnapped from a boarding school in northwest Nigeria, as one of the victims told Reuters how their abductors had ...
News
1 year ago

Gunmen have released girls who were kidnapped from a boarding school in the northwest Nigerian state of Zamfara, the governor said in a tweet on ...
News
1 year ago
Next Article