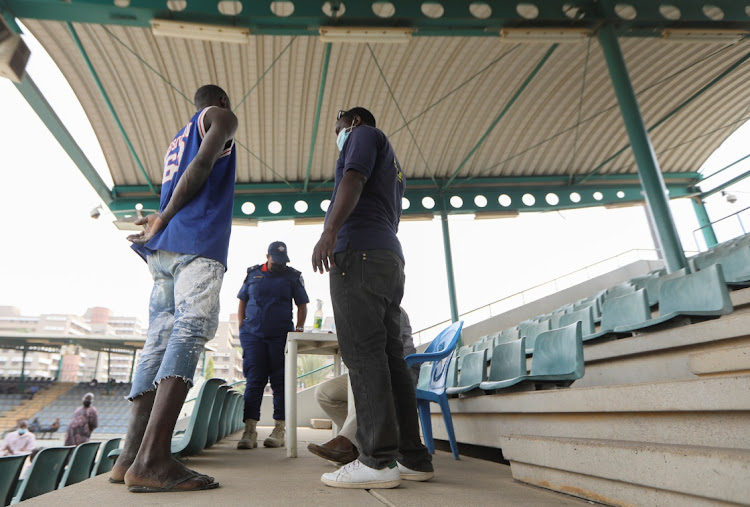 A COVID-19 rule breaker stands before an official during an interrogation at Eagle Square in Abuja, Nigeria, in this recent picture.
Image: AFOLABI SOTUNDE

ABUJA - Eagle Square in Nigeria's capital Abuja usually hosts concerts, rallies, and even presidential inaugurations but since the COVID-19 pandemic it has become home to a mobile court where those who break rules aimed at containing the virus are prosecuted.

Small groups of men reluctantly file inside the square, which is surrounded by stadium seats, to receive fines from a judge of 2,000 naira ($5.25) or more for offences such as not wearing masks, failing to social distance or being in a gathering over 50 people.

They are lucky; a law signed by President Muhammadu Buhari in January allows jail terms of up to six months for rulebreaking.

"The court has its discretion," said prosecutor Udeme Umana, adding that it did not want to send anyone to prison.

Other Nigerian states, including southeastern Anambra and western Kwara state have also trialled mobile courts, where the accused are brought by police to courts that are dismantled daily and can move to different locations.

Enforcers face a daunting task - few in Nigeria's markets, shops or on public transport wear masks, and those that do often wear them below their nose or mouth. Even some police at the many Abuja road checkpoints are without masks.

Rights groups have warned that arbitrary enforcement of these rules could lead to human rights abuses.

But authorities say letting up on the rules could allow infections to soar, even as Nigeria rolls out vaccinations. Nigeria has had 159,252 confirmed cases and 1,988 deaths from the virus.

A patrol picked up Martin Ukaa, among the 30 men and women prosecuted at Eagle Square that day, as he waited outside, maskless, for a job interview. He said he had no idea there were mobile courts, but would be more careful after the stinging fine.

"I don't really feel bad because I know I am paying for my sins," Ukaa said.

The African Population Health Research Centre has been mining data across 47 countries in Africa, tracking differences in Covid-19 infection, illness ...
News
10 months ago

Nigeria received its first Covid-19 vaccines on Tuesday to kick off an inoculation programme in Africa's most populous nation, delivered under the ...
News
10 months ago
Next Article