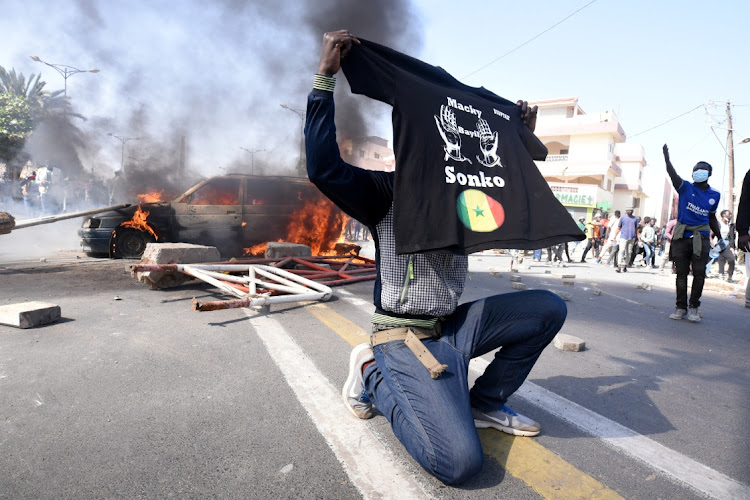 A supporter of opposition leader Ousmane Sonko, who was arrested on sexual assault accusations and released on bail under judicial supervision, holds a T-shirt reading "Macky, leave Sonko" during a protest in Dakar, Senegal March 8, 2021.
Image: REUTERS/Cooper Inveen

Senegal opposition leader Ousmane Sonko called on Monday for more protests against President Macky Sall after being indicted and released on bail over a rape charge that has sparked violent unrest across the country.

Sonko's release was cheered by participants in the protests that have buffeted one of West Africa's most stable democracies in the past week, leaving at least eight dead in clashes with police, according to rights group Amnesty International.

After being freed, Sonko asked supporters to continue demonstrations, but emphasised they should be peaceful.

“We are not asking the people to go and unseat Macky Sall,” he said at a news conference.

“But let's be clear, the revolution is marching its way to 2024,” he said in reference to the next presidential election.

It was unclear how his release would affect plans for three days of nationwide protests from Monday. The unrest is the worst the country has seen in years as youth also vent frustrations about unemployment, inequality and corruption.

In his first public comments since the start of the turmoil, Sall said he understood why young people had taken to the streets.

“Because you don't have a job, because you aspire to a better future,” he said in a televised speech, pledging to provide extra funding to support employment and entrepreneurship.

He promised to shorten a nightly pandemic-linked curfew that has proved particularly unpopular, stifling the informal economy on which millions depend.

“I will use all the powers conferred on me by my office to support a return to calm,” he said.

Political pressure has risen against Sall, whose tenure has been plagued by accusations that he unjustly torpedoes political challengers and worries that he may seek to extend his rule beyond his allotted two-term limit.

Sonko, who finished third in the 2019 presidential election, was arrested last Wednesday after an employee of a beauty salon accused him of raping her. He denies the accusation and says it is an attempt by Sall to kneecap a rival.

The government denies this.

Many are suspicious of the accusations against Sonko because two other prominent rivals of Sall were previously targeted by criminal charges that prevented them from running for president in 2019.

Senegalese authorities have restricted internet access as protests over the detention of an opposition leader intensify, internet monitor NetBlocks ...
News
1 year ago

Hundreds of rock-throwing protesters clashed with police in Senegal's capital on Wednesday as the main opposition leader was due to appear in front ...
News
1 year ago
Next Article