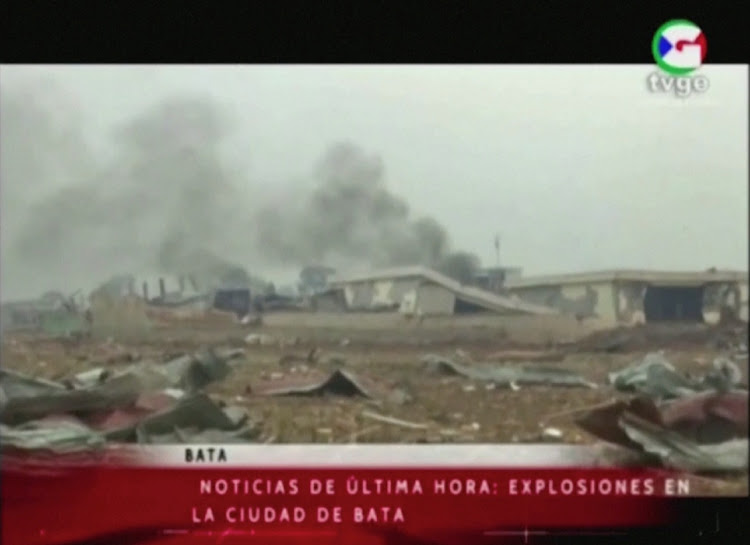 Smoke rises from destroyed structures following explosions at a military base, according to local media, in Bata, Equatorial Guinea on March 7, 2021.
Image: REUTERS TV

The death toll from a series of explosions in a military barracks in Equatorial Guinea has risen to 98, the health ministry said on Monday after volunteers searched the rubble for bodies.

At least 615 people were injured in the blasts on Sunday, which started with a fire at the Nkoantoma Military Base in the coastal city of Bata, according to the defence ministry.

Of the wounded, 299 remained hospitalised, the ministry wrote on Twitter.

President Teodoro Obiang Nguema, the vice president's father, has attributed the accident to negligence related to the handling of dynamite and said the explosions damaged almost all homes and buildings in Bata, a city of just over 250,000 people.

Equatorial Guinea's health ministry posted on Twitter that it had prepared a mental health brigade made up of psychiatrists, psychologists and nurses to attend to the victims of the blast.

"The damages are not only physical but also mental," the ministry said.

Anglo American Platinum (Amplats) on Monday posted a price-driven jump in annual profit and set its sights on boosting output by 20% while looking to ...
Business
8 months ago

Images published by local media showed bodies wrapped in sheets and lined up on the side of a road, with children being pulled out from under piles of broken concrete and twisted metal.

Television station TVGE showed the vice president visiting a hospital where victims were being treated on Monday.

The blasts come as Equatorial Guinea, an oil producer, is suffering a double economic shock because of the coronavirus pandemic and a drop in the price of crude oil, which provides around three-fourths of state revenue.

The former Spanish colony has been run by Obiang, Africa's longest-serving leader, since 1979.

The majority of the population of 1.4 million lives in poverty. The government has called for international support to help in the search and rescue effort and also in efforts to rebuild.

"Following the devastating explosions in Bata yesterday... Spain will proceed with the immediate dispatch of a shipment of humanitarian aid," Spanish Foreign Minister Arancha Gonzalez Laya wrote on Twitter.

A war of words has erupted between ArcelorMittal SA (Amsa) and the National Union of Metalworkers of SA (Numsa) over the death of three union members ...
News
8 months ago

The department of employment and labour will launch an investigation into the explosion at the ArcelorMittal plant in Vanderbiljpark, Vaal, south ...
News
8 months ago

The three workers who were trapped in the rubble after an explosion at ArcelorMittal in Vanderbijlpark in the Vaal have been found dead. The ...
News
8 months ago
Next Article