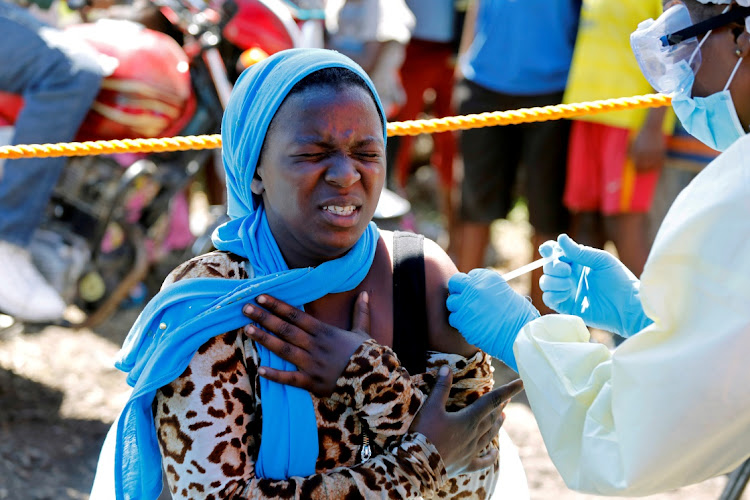 A young woman reacts as a health worker injects her with the Ebola vaccine, in Goma, Democratic Republic of Congo on August 5, 2019.
Image: Baz Ratner

The Centers for Disease Control and Prevention (CDC) has issued new public health requirements for U.S. visitors who have recently been in the Democratic Republic of the Congo (DRC) or Guinea that take effect on Thursday to address Ebola concerns.

Travelers who have been in the two central African countries within the past 21 days must fly to one of six U.S. airports - New York-JFK, Chicago, Atlanta, Washington Dulles, Newark or Los Angeles, according to the order first announced on Monday but signed on Tuesday.

The CDC will require airlines to collect and transmit passenger information electronically to the agency for public health follow-up for all passengers who have been in the two countries who are boarding a flight to the United States.

"Timely public health follow-up requires health officials to have immediate access to accurate and complete contact information for travelers as they arrive in the United States,” CDC Director Rochelle Walensky said in a statement.

Recently, less than 100 people a day have been arriving in the United States who have been in either country. The CDC said outbreaks are centered in remote areas of the countries and added that "the risk of Ebola to the United States is extremely low."

Three new cases of Ebola have been confirmed in eastern DRC, bringing to 11 the number of cases since authorities declared a resurgence of the deadly virus last month, a health official told reporters on Monday.

The cases represent a flare-up of the 2018-20 epidemic, which killed more than 2,200 people before it was declared over last June. Four people have died and two have recovered among the 11 cases.

In January the Biden Administration, in a move to curb transmission of highly contagious new coronavirus variants, barred most non-U.S. citizens from the United States who have been in SA within the prior 14 days, extending restrictions in place for Brazil and most of Europe since 2020.

How does the J&J vaccine compare to other coronavirus jabs? Four questions answered

Maureen Ferran, a virologist at the Rochester Institute of Technology, explains how the Johnson & Johnson vaccine works and explores the differences ...
News
7 months ago

A Russian trial testing the effectiveness of revaccination with the Sputnik V shot to protect against new mutations of the coronavirus is producing ...
News
7 months ago

Somali cattle herder Omar Hussein isn't joining the global scramble for a COVID-19 vaccine - he's not sure the jab will even reach his besieged town ...
News
8 months ago
Next Article