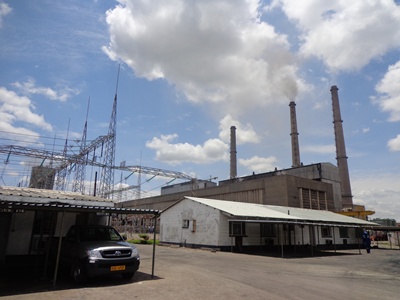 The Hwange power station, in the northwestern part of the country, caught alight on Wednesday evening. The fire burnt for about 40 minutes, resulting in Zimbabwe losing about 140MW of electricity and forcing unscheduled load-shedding.

Zimbabwe’s state-owned Zesa Holdings issued a statement saying the fire broke out in the unit 1 boiler as a result of a leak in diesel supply lines.

Breaking: Hwange Power Station Unit 1 has caught fire today. Sources on the power plant have said the unit caught fire a few hours ago. The Minister of Energy and Power Development Honourable Soda Zhemu confirmed this development and said he is yet to get the full extent of the pic.twitter.com/IFaFzrGV68

“Zesa Holdings wishes to advise its valued stakeholders that one of the units at Hwange power station caught fire around 5pm this evening,” it said.

According to Zesa Holdings executive chairperson Dr Sydney Gata, the fire broke out in the unit 1 boiler as a result of a leak in the diesel supply line and lasted for about 40 minutes. There were no casualties arising from the fire.

“Although we lost 140MW, leading to load-shedding between 5.30pm and 8.30pm due to suspension of load on units 2 and 5, we are in the process of firing the two units to restore power supply to the national grid,” said Gata.

Zimbabwe has been battling erratic power supply, which has seen load-shedding lasting up to 18 hours a day. The country’s power supply challenges have seen it resort to importing electricity from regional producers to cover the supply gap.

Hwange power station has a production capacity of 920MW. But due to ageing equipment and constant breakdowns, the plant is only producing 293MW, according to the Zimbabwe Power Company.

Even though normal supply of power was expected to resume on Thursday after the fire, most parts of the country were still without electricity.