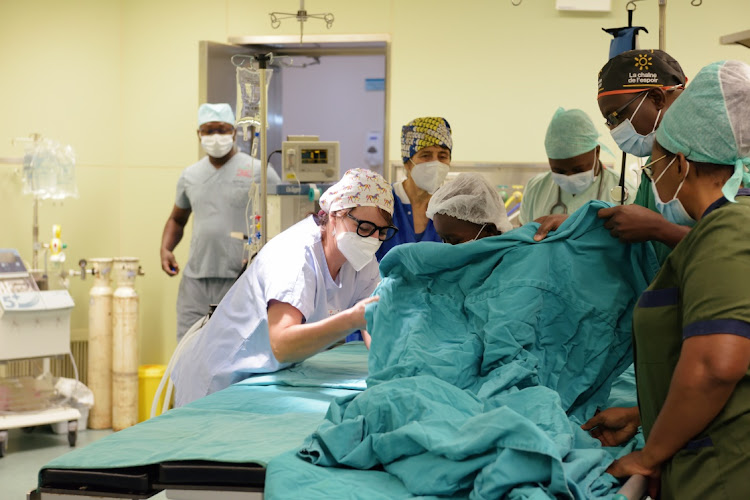 Landry Nion, 9, is being prepared by the medical team of the French association "La Chaine de l'Espoir" for his open-heart surgery, at the General Hospital Tengandogo in Ouagadougou, Burkina Faso on January 13, 2021.
Image: ANNE MIMAULT

At the end of an empty hallway in a Burkina Faso teaching hospital, a group of children sat together in medical gowns, nervously awaiting operations that could save their lives.

The smallest, nine-year-old Landry Nion, fixated on a phone game while an older girl cheerfully encouraged him.

"After the operation, I would like to become a footballer like Messi," Nion said shortly before his surgery.

The five children have become the first in Burkina Faso to successfully undergo open heart surgery. It's a landmark event that doctors say could signal a sea-change for the West African country's healthcare system.

Nion and his peers, all born with similar heart defects, were identified by French charity La Chaine de l'Espoir to participate in a week-long surgical campaign at the Tengandogo University Hospital in Ouagadougou.

The operations were led by European doctors with assistance from Burkina Faso counterparts, who are being trained to perform operations independently.

"It's largely about forming a team that can operate alone on children here, and we can stop having to transfer them to Morocco, to Tunisia, to France," said Eric Cheysson, La Chaine de l'Espoir's president, who was in Ouagadougou to oversee the operations.

The wife of a South African mine worker, Christo Bothma  who was abducted in Burkina Faso nearly two years ago,  says she is hoping for good news on ...
News
2 years ago

Burkina Faso is among the poorest countries in the world and continues to face major challenges in its health sector, despite increased government funding and international support.

All five children are now recovering after the five-hour operation, but Nion's recovery will be the longest.

Two weeks after the operation, an infection that arose during his surgery will keep him confined to the recovery ward, even as the other children are preparing to go home.

However, his mother, Amandine Abilabou, 37, is hopeful as she sees her son's condition improve after tearful, anxious days by his side.

"The learning stage is very long for heart surgery," said Adama Sawadogo, a cardiovascular surgeon who participated in Nion's operation.

"I had done almost 10 years in the surgery field ... The surgeon who I assisted for this operation has close to 40 years of experience."

The family of Gerco van Deventer are struggling to raise the $1.5m (about R22m) his captors are demanding for his release.
News
2 years ago

Northern Cape premier Zamani Saul was in high school when his idol and Burkinabé revolutionary Thomas Sankara was killed in 1987.
News
2 years ago

Children in Africa have become the latest target for tobacco companies‚ according to recent research by the African Tobacco Control Alliance (ATCA). ...
News
5 years ago
Next Article