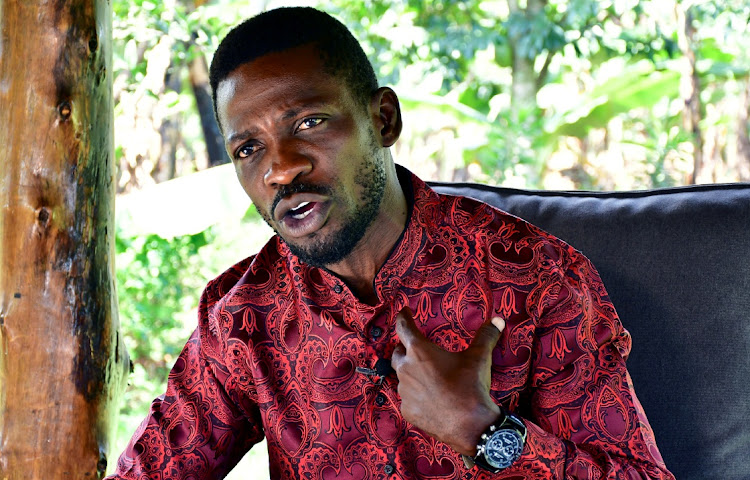 Robert Kyagulanyi, also known as Bobi Wine's home has been surrounded by security forces since the vote.
Image: ABUBAKER LUBOWA

Uganda accused the U.S. ambassador on Tuesday of seeking to subvert last week's presidential election by trying to visit the main opposition candidate at his home, which has been surrounded by security forces since the vote.

Troops prevented pop star-turned-legislator Bobi Wine from leaving his house shortly after he returned from voting in Thursday's presidential election, in which he ran against incumbent Yoweri Museveni.

Museveni, 76, who has been in power since 1986, was declared winner of the poll with 59% of the vote against 35% for Wine, who became famous after years of singing about government corruption and nepotism, charges the government denies.

The U.S. embassy said late on Monday that Ambassador Natalie E. Brown had been stopped from visiting Wine, who it referred to by his real name, Robert Kyagulanyi, at his residence in a suburb in the northern outskirts of the capital.

The mission said Brown wanted to check on his health and safety.

On Tuesday Wine said on Twitter that no one had been allowed in and he and his wife had run out of food, and milk for her 18-month-old niece. Police spokesman Fred Enanga said a motorcycle courier had delivered food to Wine's house each day.

Government spokesman Ofwono Opondo said Brown had no business visiting Wine, who the army says is being held to prevent potential unrest breaking out in the wake of the result.

"What she has been trying to do blatantly is to meddle in Uganda's internal politics, particularly elections, to subvert our elections and the will of the people," he said. "She shouldn't do anything outside the diplomatic norms."

There was no immediate comment from Brown or the embassy.

The public rebuke to the United States from the Ugandan government is relatively unusual as the two nations are allies.

Washington supports Ugandan soldiers serving in an African Union peacekeeping mission in Somalia and has donated about $1.5bln (R22,33bln) to Uganda's health sector in the past three years.

Trump's barbarians prove it's not just a black thing

The insurrection of January 6 in the US has unleashed a wave of condemnation of Donald Trump and the mob he commanded to storm that country’s Capitol.
Opinion
2 months ago

Opondo said, without providing any evidence, that Brown had a track record of causing trouble in countries where she has worked in the past. The government was watching her, he said.

He made a further dig at the United States on Twitter, posting pictures of armed soldiers deployed in both Kampala and Washington. "This deployment in Kampala is for 'intimidation' while in Capitol Hill it's for 'security,'" he wrote.

The U.S. embassy has said last week's vote was tainted by harassment of opposition candidates, suppression of media and rights advocates and a nationwide internet shutdown.

"These unlawful actions and the effective house arrest of a presidential candidate continue a worrying trend on the course of Uganda's democracy," it said in the statement.

On Tuesday, Wine's lawyers filed a petition in the high court challenging the legality of detaining Wine and his wife without charge. The court has not yet said when the petition will be heard, lawyer Benjamin Katana told Reuters.

During the campaign, security forces routinely broke up Wine's rallies with teargas, bullets, beatings and detentions, citing violations of laws meant to curb the spread of the coronavirus.

In November, 54 people were killed as security forces quelled a protest that erupted after Wine was detained for alleged violation of the anti-coronavirus measures.

Wine and his National Unity Platform (NUP) have rejected the results and said they were planning a court challenge.

On Monday, security forces cordoned off the party's offices in the capital. The party said that was aimed at complicating its efforts to collect evidence of irregularities committed during the election.

Uganda's long-time leader Yoweri Museveni held a commanding lead in a presidential election according to partial results on Saturday morning, with ...
News
2 months ago

Uganda's opposition front-runner in this week's presidential election said on Friday he rejected early preliminary results released by the electoral ...
News
2 months ago
Next Article