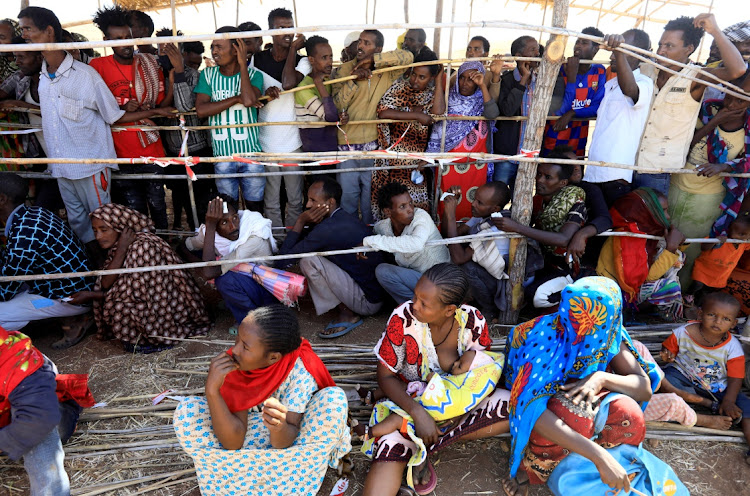 Ethiopians who fled the ongoing fighting in Tigray region gather to receive relief aid at the Um-Rakoba camp on the Sudan-Ethiopia border, in Kassala state in December.
Image: MOHAMED NURELDIN ABDALLAH

Fighting is still going on in several parts of Ethiopia's northern Tigray region and almost 2.3 million people, or nearly half of the population, need aid, a U.N. report said.

The report, the most comprehensive public assessment of the humanitarian situation in Tigray since conflict erupted there on Nov. 4, was posted online late on Thursday.

Federal government troops are fighting the Tigray People's Liberation Front (TPLF), a political party that was governing the province. The government declared victory in late November though the TPLF vowed to fight on.

The state-run Ethiopian Broadcasting Corporation said on Friday that Sebhat Nega, a founding member of the TPLF, had also been captured. The TPLF could not be reached for comment.

The whereabouts of TPFL leader Debretsion Gebremichael, other members of the party's central committee and many high-ranking former military officers remains unknown.

The findings in the humanitarian report stem from two missions conducted at the end of December by U.N. and government agencies. They said the humanitarian situation was dire and two out of four refugee camps in Tigray remained inaccessible.

The report said fighting was reported in rural areas as well as on the periphery of regional capital Mekelle and the towns of Shire and Sheraro, among other locations.

About 2.2 million people have been displaced within Ethiopia's Tigray region since fighting erupted there in November with about half fleeing after ...
News
1 year ago

The fact-finding teams also said schools, hospitals and administrative offices had been looted and damaged. They said only five out of 40 hospitals in Tigray were physically accessible, with another four reachable by mobile networks. "Apart from those in Mekelle, the remaining hospitals are looted and many reportedly destroyed," the report said.

They said the health facilities in the major cities that were partially functioning had "limited to no stock of supplies and absence of health workers".

The disruption might also coincide with a massive spike in COVID-19 cases, the report said.

"The interruption of COVID-19 surveillance and control activities for over a month in the region, coupled with mass displacements and overcrowded conditions in displacement settings, is feared to have facilitated massive community transmission of the pandemic," it said.

The report said regional and local bureaucratic hurdles were preventing some agencies from getting into Tigray, despite clearance from the federal government. It also said humanitarian supplies and equipment were being looted in some areas.

Ethiopia's own estimates of people in need of aid are even higher than U.N. figures. The U.N. said 950,000 needed aid before the conflict and another 1.3 million would now need help.

However, the report said the government-run Tigray Emergency Coordination Center estimated that more than 4.5 million people needed emergency food assistance, including 2.2 million people who had been forced to flee their homes within Tigray.

Reuters could not immediately reach the center for comment and other government officials were unavailable. (Editing by David Clarke and Daniel Wallis)

Ethiopia offered a 10 million birr ($260,000) reward on Friday for information on the location of fugitive leaders of a rebellious force in northern ...
News
1 year ago

Sudan's armed forces said on Wednesday that a number of its officers had been ambushed by "Ethiopian forces and militias" during a security patrol of ...
News
1 year ago
Next Article