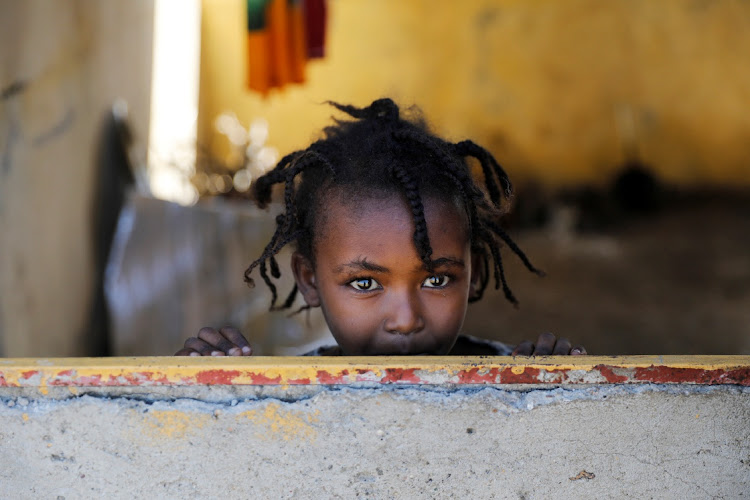 An Ethiopian girl stands at the window of a temporary shelter, at the Village 8 refugees transit camp, which houses Ethiopian refugees fleeing the fighting in the Tigray region, near the Sudan-Ethiopia border, Sudan, December 2, 2020.
Image: BAZ RATNER

Ethiopia and the United Nations agreed on Wednesday to channel desperately-needed humanitarian aid to the northern region of Tigray, where a month of war is believed to have killed thousands of combatants and civilians.

Federal troops have been battling the Tigray People's Liberation Front (TPLF) and have captured the regional capital Mekelle. The pact announced by U.N. officials will allow relief into government-controlled areas of Tigray.

The Ethiopian conflict has forced more than 45,000 refugees to flee into Sudan, displaced many more within Tigray and worsened suffering in a region where 600,000 people already depended on food aid even before hostilities broke out on Nov. 4.

Highlighting the dangers, four Ethiopian employees of two foreign aid agencies were killed in a camp for Eritrean refugees in Tigray last month, a humanitarian and a diplomatic source said.

It was unclear who killed them, and there was no immediate comment from Ethiopia's government nor the Tigray People's Liberation Front (TPLF). The agencies asked not to be named as they had not yet informed their relatives.

Food is running out for 96,000 Eritrean refugees in Tigray who have fled repression in their own country..

And medics in Mekelle were short of painkillers, gloves and bodybags, the International Committee of the Red Cross said.

U.N. humanitarian coordination agency OCHA said the deal would "ensure that humanitarians will have unimpeded, sustained and secure access ... to areas under the control of the Federal Government in the Tigray Region."

After phone and internet connections were largely shut down when the war began, telecoms in half a dozen towns in Tigray were partly restored, Ethio Telecom said on Wednesday, including Dansha, Humera and Mai Kadra, all controlled by the military.

Prime Minister Abiy Ahmed declared victory after the fall of Mekelle on Saturday, but there has has been little verifiable information from the highland city of 500,000 people since.

TPLF leaders fled for the hills, from where they say they continue to fight.

Abiy on Wednesday shifted focus to next year's parliamentary election, meeting with political parties and election officials about the mid-2021 vote, his office said.

His government postponed it this year due to the COVID-19 pandemic, but Tigray went ahead anyway and re-elected the TPLF, a guerrilla movement-turned-political party.

That was one reason for the federal government's offensive against TPLF leaders, a conflict that may jeopardise political reforms enacted since Abiy took office in 2018.

Abiy, Africa's youngest leader at 44 and who won the 2019 Nobel Peace Prize for a pact with Eritrea, was pictured in battle fatigues meeting military officers in official photos on Wednesday.

He took leadership after nearly three decades of a TPLF-led national government which had become repressive since its overthrow of a Marxist dictatorship.

Ethiopia's Prime Minister Abiy Ahmed lauded his troops on Monday for ousting a rebellious northern movement, but the leader of Tigrayan forces said ...
News
1 year ago

Abiy removed Tigrayans from government and security posts, saying they were over-represented for an ethnic group making up 6% of Ethiopia's population. The military moved into action when a federal army base was attacked in Tigray.

The TPLF accuses their former military comrade and partner in government of dominating them in order to increase his personal grip over the nation of 115 million people, which is split into 10 regions run by different ethnic groups.

Federal police blamed the TPLF, without proof, for a small blast in the capital on Wednesday that injured an officer lightly. There was no immediate response from the TPLF.

"Wars are not like taps that you turn on and then turn off. This is going to be a very long, drawn-out process," Horn of Africa expert Rashid Abdi told an online forum.

The Ethiopian military will begin the "final phase" of an offensive in the rebellious northern Tigray region, Prime Minister Abiy Ahmed said on ...
News
1 year ago

A cyclone that hit parts of Somalia this week killed eight people and displaced thousands, flooded farmlands and could worsen a locust plague, an ...
News
1 year ago

African peace envoys were due to meet Ethiopian Prime Minister Abiy Ahmed on Friday, a day after he said the military was beginning the "final phase" ...
News
1 year ago
Next Article