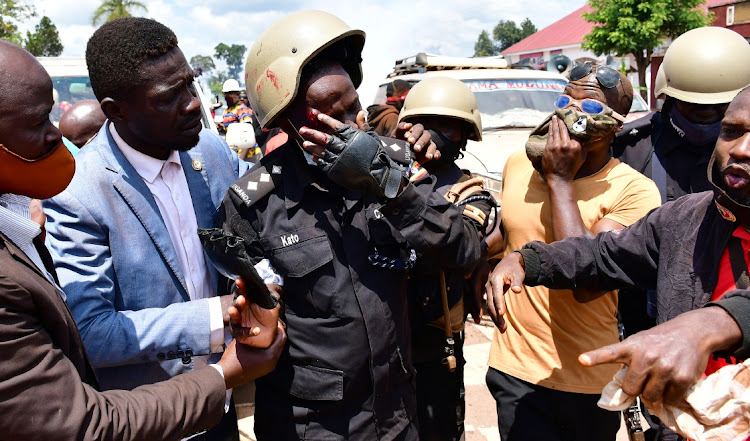 Ugandan pop star and presidential candidate Robert Kyagulanyi, also known as Bobi Wine, assists one of his bodyguards who was injured in clashes between Wine's supporters and security forces in Kayunga district near Kampala on Tuesday.
Image: ABUBAKER LUBOWA

A music producer for Ugandan pop star and presidential candidate Bobi Wine has been wounded in the mouth by a rubber bullet during clashes between security personnel and Wine's supporters, a spokesman for his party and police said on Tuesday.

The incident is the latest in escalating violence in the east African country as authorities crack down on supporters of Wine, who is seeking to end the long rule of President Yoweri Museveni, 76, in an election scheduled for Jan. 14.

Joel Senyonyi, spokesman for Wine's party National Unity Platform (NUP), said Daniel Oyerwot was hit by the rubber bullet as he sat with Wine in a car that was part of a convoy.

Wine, whose real name is Robert Kyagulanyi, and his supporters were heading to a campaign venue in Kayunga district, about 65 km (40 miles) north of the capital Kampala.

"He was shot with a rubber bullet, he has lost some teeth and his mouth is torn," Senyonyi said.

Ugandan pop star and presidential candidate Bobi Wine said on Friday that security forces had ordered hotels in a town where he was campaigning to ...
News
1 year ago

Ugandan pop star and presidential candidate Bobi Wine, whose arrest this week triggered protests that led to at least 37 deaths, was released on bail ...
News
1 year ago

Footage aired on Ghetto TV, an online broadcaster affiliated with NUP, showed Wine in a hospital holding Oyerwot's hand as he lay on a bed, with a blood stained bandage covering part of his mouth.

Police spokesman Patrick Onyango said in a statement NUP supporters had attacked security personnel and disrupted traffic and that three people, including Oyerwot, had been injured by "teargas fragments" as police and the military dispersed them.

Wine said on Twitter that several members of his staff had been injured and that some were in a critical condition.

The singer also said he and his supporters had attempted to move to another campaign venue, located in Jinja in eastern Uganda, but security personnel had blocked him, had shot and blown out his car's tyres.

Another bullet shattered his car's windscreen, punching a hole in it, Wine added.

Last month a total of 54 people were killed, Museveni said on Sunday, as police and military battled to quell riots in multiple cities that erupted after Wine was arrested for alleged violation of anti-coronavirus rules.