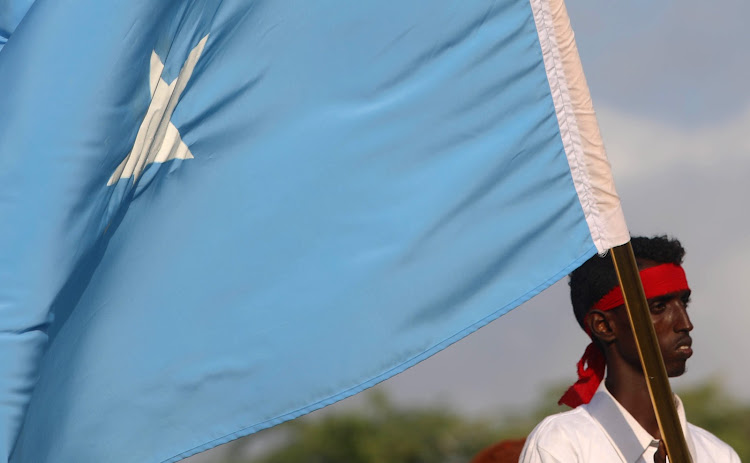 A protester carries the Somali national flag during a demonstration against Al-Shabaab militant group after last weekend's explosion in KM4 street in the Hodan district at the stadium Koonis in Mogadishu, Somalia on October 18 2017.
Image: REUTERS/Feisal Omar

Somalia expelled Kenya's ambassador and recalled its own envoy from Nairobi after accusing its neighbour of interfering in the electoral process in Jubbaland, one of Somalia's five semi-autonomous states.

Relations between the countries have been tense over the ownership of potential oil and gas deposits, some of which lie off the coast of Jubbaland.

Somalia did not go into further details on the alleged interference, while Kenya denied any wrongdoing and dismissed what it called "unsubstantiated allegations".

"As a result of the Kenyan government's political interferences in the internal affairs of Somalia, the regional President of Jubbaland has reneged on the election agreement that was reached on the 17th September 2020 in Mogadishu," Somalia's foreign ministry said late on Sunday.

The Somali statement published on Facebook did not give any details on the "election agreement" or how it thought it had been broken in Jubbaland - a southern state which borders Kenya and includes the major Somali port of Kismayo.

Muslima Abdirahman, a Somali mother of nine, escaped death twice in the past two years while shopping for groceries in Mogadishu, where Islamist ...
News
1 year ago

Kenya's foreign ministry said on Monday it had not received any official communication from Somalia about the expulsion of its ambassador.

It is incumbent upon "all political actors in Somalia to stay true to their political commitments, avoid distracting actions, but rather engage constructively to ensure timely implementation of the elections calendar," it added.

In February last year, Kenya recalled its ambassador after Mogadishu decided to auction oil and gas exploration blocks at the centre of their maritime rights dispute. The two countries restored ties in November last year.

Kenya has backed the Somali government in other areas and contributes troops to an African Union-led force there fighting al Qaeda-linked militants.

Early on Monday, militants attacked an army base in central Somalia and killed five soldiers, Major Nur Mohamud of the Somali army said.