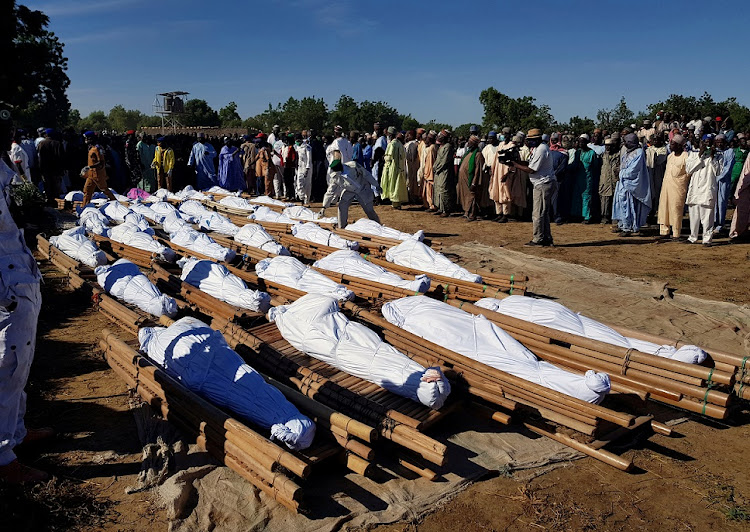 Men gather near the bodies of people killed by a militant attack, during a mass burial at Zabarmari, in the Jere local government area of Borno state, in northeast Nigeria, on November 29 2020.
Image: REUTERS/Ahmed Kingimi

Villagers in northeast Nigeria's Borno state on Sunday buried 43 farmers killed in an attack by suspected Islamist militants, while security forces searched for dozens who are still missing.

About 30 of the men were beheaded in the attack, which began on Saturday morning in the village of Zabarmari, while residents said 70 people in all are feared dead.

While there was no claim of responsibility, such massacres have been carried out in the past by Boko Haram or the Islamic State West Africa Province, which are both active in the area, where Islamic militants have killed at least 30,000 people.

In Zabarmari, dozens of mourners surrounded the bodies, which were wrapped in white burial shrouds and placed on wooden pallets, as clerics led prayers for the deceased.

One resident and Amnesty International said 10 women were among those missing.

UN humanitarian co-ordinator Edward Kallon said he was “outraged and horrified” by “the most violent direct attack” against civilians this year.

The UN estimated that at least 110 people were killed across the Jere local government area of Borno state.

“In one side, they stay at home, they may be killed by hunger and starvation, on the other, they go out to their farmlands and risk getting killed by the insurgents,” he said.

Food prices in Nigeria have risen dramatically in the past year, driven by flooding, border closures and insecurity in some food-producing areas.

Nigeria to sanction CNN for report on shooting of protesters -minister

Nigeria will sanction CNN for the U.S. news organisation's report that the country's military shot and killed protesters demonstrating against police ...
News
7 months ago

Nigeria has jailed three family members for forcing a teenager into prostitution in Russia, the country's anti-trafficking agency said on Tuesday.
News
7 months ago
Next Article