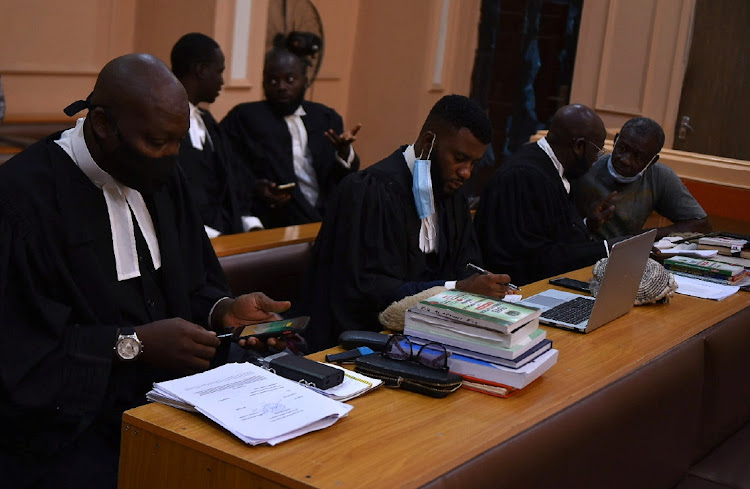 Lawyers are pictured at a court for an appeal hearing about a blasphemy conviction, in northern Nigeria's Kano state, Nigeria November 26, 2020.
Image: REUTERS/Stringer

Two judges in northern Nigeria on Thursday heard the first appeals against Islamic law blasphemy convictions that caused global outrage when a man was sentenced to death over a WhatsApp message and a 13-year-old received a 10-year jail term.

The judges, at the appeals section of the secular high court in the city of Kano, said verdicts would be delivered at a later date.

In August, a Kano sharia court sentenced Yahaya Aminu Sharif to death for allegedly sharing a blasphemous message on WhatsApp and Omar Farouq, accused of making blasphemous comments in an argument, received a prison sentence.

The convictions were condemned by rights groups, the United Nations and the head of Poland's Auschwitz Memorial who said he and others would volunteer to each serve a month of the boy's prison sentence. They also sparked a debate about sharia's compatibility with Nigeria's secular constitution.

Fuad Adeyemi, an imam in Nigeria's capital Abuja, respects those who believe that a 22-year-old man accused of sharing a blasphemous message on ...
News
1 year ago

An Indonesian court sentenced a man to two-and-a-half years in prison for declaring himself an atheist on the social networking website. Muaro ...
News
10 years ago

Nigeria is roughly evenly split between a predominantly Muslim north and mainly Christian south. Sharia, or Islamic religious law is applied in 12 of Nigeria's 36 states where sharia courts operate alongside secular ones.

The charges prompted anger in Kano, the north's commercial hub, and protesters burned down Sharif's family home in March.

Kola Alapinni, a defence lawyer representing the two defendants, said the convictions were incompatible with Nigeria's constitution, which gives people the right to have freedom of expression.

Both sides can take their case to the federal court of appeal if they are unhappy with the state appeal court's ruling.