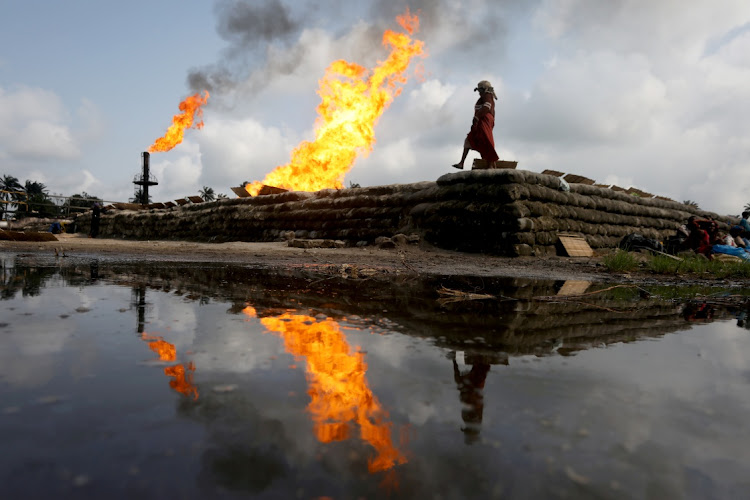 A reflection of two gas flaring furnaces and a woman walking on sand barriers is seen in the pool of oil-smeared water at a flow station in Ughelli, Delta State, Nigeria. The court on Monday sentenced seven of the 10 suspects to seven years imprisonment for oil theft.
Image: AFOLABI SOTUNDE

A Nigerian court has sentenced six foreigners and one Nigerian to seven years in prison for oil theft, the Economic and Financial Crimes Commission (EFCC) said on Tuesday, three years after the navy arrested 10 suspects with a vessel carrying crude oil off the Niger Delta.

The suspects - a Nigerian, two Pakistanis, three Ghanaians, one Indonesian, one Beninois and two Ukrainians - had siphoned about two thousand metric tonnes of crude oil from a loading facility belonging to Shell Petroleum, the navy said in 2017.

The court on Monday sentenced seven of the 10 suspects to seven years imprisonment, EFCC spokesman Wilson Uwujaren said in a statement.

Uwujaren said the suspects were convicted on four counts of conspiracy, dealing in petroleum products without a licence and tampering with oil pipelines alongside Asztral Shipping Corporation SA, and a vessel MT. TECNE(a.k.a MT STAR).

King Emere Godwin Bebe Okpabi holds up a plastic bottle containing contaminated water from his community in Nigeria, proof of oil pollution that he ...
News
5 years ago

Nine countries in Africa have been flagged as having a “severe” or “high” threat of kidnapping for ransom. Global risk and crisis management ...
News
5 years ago

He added that the ship did not have clearance from Nigerian authorities to navigate in Nigerian waters and the foreign crew did not have valid documents to enter the country.

Nigeria is the world's eighth biggest exporter of crude oil, but a sizeable proportion of its output is stolen by thieves who either drill into pipelines or hijack barges loaded with oil, theft that is known locally as "bunkering".

Oil accounts bring in 90% of Nigeria's foreign exchange and the bulk of government revenue. Nigeria slipped into recession in the third quarter, blaming the impact of the COVID-19 pandemic and low oil prices, amidst double-digit inflation.