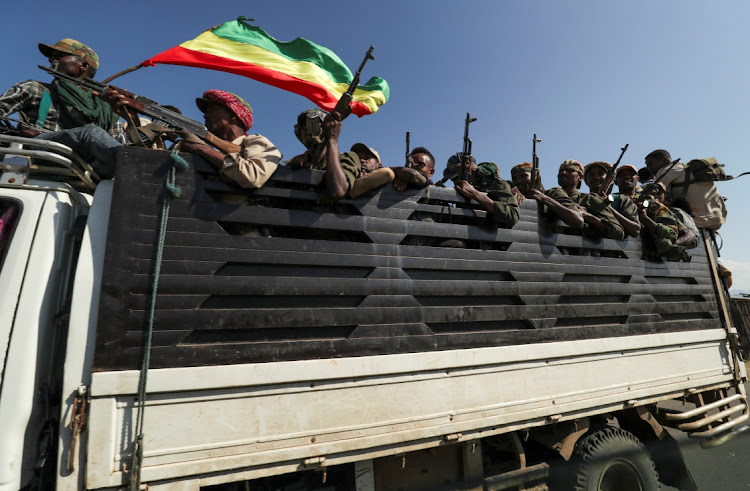 Members of Amhara region militias ride on their truck as they head to face the Tigray People's Liberation Front (TPLF), in Sanja, Amhara region near a border with Tigray, Ethiopia on November 9, 2020.
Image: REUTERS/Tiksa Negeri

Ethiopian troops took an airport in the Tigray region during an offensive against local leaders defying Prime Minister Abiy Ahmed's authority, state media said on Tuesday, as the African Union (AU) called for an end to bloodshed.

Hundreds have been killed in an escalating conflict that some fear could slide into civil war given deep animosity between the Tigrayans and the government of Abiy Ahmed, who comes from the largest Oromo ethnic group.

Various Tigrayan forces surrendered during the seizure of Humera airport, near the border with Sudan and Eritrea, while the military also captured a road leading from the town to the Sudanese border, the Fana broadcaster reported.

The Ethiopian Press Agency posted photos that it said showed federal soldiers, backed by forces from the neighbouring Amhara region, at the airport.

However, Humera residents were going about their lives normally, the local government's communication office said citing Tigray TV, without commenting on the status of the airport.

Foreign media had no access to Tigray on Tuesday and Reuters could not confirm the reports. There was no immediate response from the Tigray People's Liberation Front (TPLF), which governs the state of more than 9 million people.

Abiy, who won the Nobel Peace Prize in 2019, ordered air strikes and sent troops into Tigray last week after accusing the TPLF of attacking a military base. Tigrayans say Abiy's government oppresses and discriminates against them and behaved autocratically in postponing a national election.

Ethiopia’s Prime Minister Abiy Ahmed sacked his army chief, head of intelligence and foreign minister on Sunday, as the military continued a five-day ...
News
1 year ago

The AU bloc called for peace talks and a ceasefire. "The chairperson (Moussa Faki Mahamat) appeals for the immediate cessation of hostilities and calls on parties to respect human rights and ensure the protection of civilians," it said.

Some Ethiopians, including soldiers, have begun crossing into Sudan amid fears of a refugee crisis, residents in the region and Sudanese state media say.

Reuters reporters on Monday travelling in Tigray and Amhara saw trucks packed with militia fighters and pickups with mounted machine-guns rushing to the frontline in support of the federal government push.

Warplanes have bombed arms depots and other targets, both sides say, while aid workers and security sources have reported heavy fighting on the ground.

Military and security sources in Amhara, on the side of the federal troops, have spoken of 500 deaths on the Tigrayan side and hundreds also from the national military.

Abiy's spokeswoman denied suggestions from some diplomats that he was ignoring mediation efforts and endangering stability in the poor and turbulent Horn of Africa region.

"There is no rebuffing of anyone by the prime minister. He had acknowledged and given gratitude for the concerns shown," the spokeswoman, Billene Seyoum, told Reuters.

"Nevertheless, Ethiopia is a sovereign nation and its government will ultimately make decisions in the long-term interest of the country and its people."

The 44-year-old prime minister is Africa's youngest leader and won his Nobel prize for democratic reforms and for making peace with Eritrea. But his militancy against Tigray has alarmed diplomats and a full-scale war could further damage an economy already reeling from the coronavirus crisis.

Abiy, a former soldier who once fought alongside Tigrayans against Eritrea, took over in 2018 after a Tigrayan-led government had dominated politics since rebels from their region toppled Marxist military rule in 1991.

But his attempts to open up a repressive political climate also led to an explosion of ethnic problems, with hundreds killed and hundreds of thousands forced to flee their homes in clashes over the last two years.

Abiy believes he can quell the Tigrayan leadership militarily, diplomats told Reuters, though they are a battle-hardened group from a 1998-2000 war with Eritrea and the defeat of dictator Mengistu Haile Mariam in 1991.

"Our law enforcement operations in Tigray are proceeding as planned: operations will cease as soon as the criminal junta is disarmed, legitimate administration in the region restored, and fugitives apprehended & brought to justice — all of them rapidly coming within reach," Abiy tweeted on Tuesday.

The TPLF has called him "merciless" with air strikes.

Sudan partially closed its border with Ethiopia, state news agency SUNA reported on Saturday, in the wake of escalating violence in the region.
News
1 year ago

Heavy fighting broke out in Ethiopia's Tigray region on Wednesday, diplomatic sources said, after the prime minister launched military operations in ...
News
1 year ago
Next Article