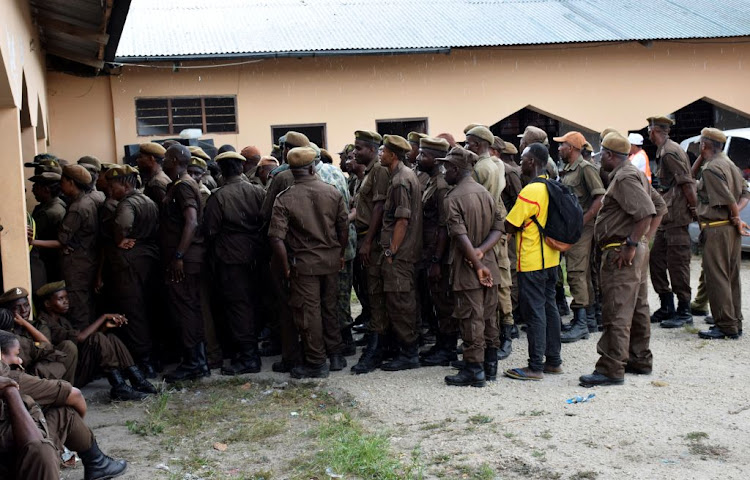 Tanzanian security officers gather at a polling centre during the early voting for essential workers at the presidential and parliamentary polls in the semi-autonomous island of Zanzibar, Tanzania, on October 27 2020.
Image: REUTERS/Stringer

Tanzania's two leading opposition parties said on Saturday they would not recognise the results of a presidential election that handed incumbent John Magufuli another term this week.

“We are calling on the international community and bodies not to recognise what was referred to as a general election, and we call on them to take appropriate action,” Freeman Mbowe, chairman of the opposition Chadema party, said in comments posted on his party's Twitter account.

“We demand that the election be called afresh right away,” he said.

The comments were made in a news conference attended by both Chadema and another leading opposition party, ACT-Wazalendo.

Mbowe, who led the opposition in parliament, urged opposition supporters to start demonstrations on Monday against the handling of the election that Tundu Lissu, the opposition presidential candidate, has called a “travesty”.

Tanzanians headed to the polls on Wednesday for presidential and parliamentary elections that President John Magufuli hopes will hand him another ...
News
1 year ago

Tanzania's National Electoral Commission on Friday declared Magufuli the winner of Wednesday's poll, after securing 84% of the vote against his rival Lissu of the Chadema party, with 13%.

In his bid for a second term, Magufuli has promised to boost the economy by completing infrastructure projects kick-started in his first term, such as a new hydropower dam, a railway line and new planes for the national carrier.

But the opposition and rights groups have complained that his administration has cracked down on critical voices, closing down media outlets and preventing opposition rallies.

The main challenger Lissu was shot 16 times in 2017 in what remains an unsolved case.

The government has denied stifling dissent.

The US has said it was concerned about “reports of systematic interference in the democratic process,” during the election.

The vote was marred by irregularities, including the use of force against unarmed civilians, pre-ticking of ballots, the detention of opposition officials and restrictions on political party agents accessing polling stations, the US Embassy said.

About 300 militants from Mozambique attacked a village in southern Tanzania and killed an unknown number of people last week, Tanzania's top police ...
News
1 year ago

A wildfire burning since the start of the week on Kilimanjaro, Africa's tallest mountain, has been placed under control, Tanzania said on Friday.
News
1 year ago

Tanzanian firefighters were battling for a third day on Tuesday to control a blaze on the slopes of Africa's highest mountain, Mount Kilimanjaro, ...
News
1 year ago
Next Article