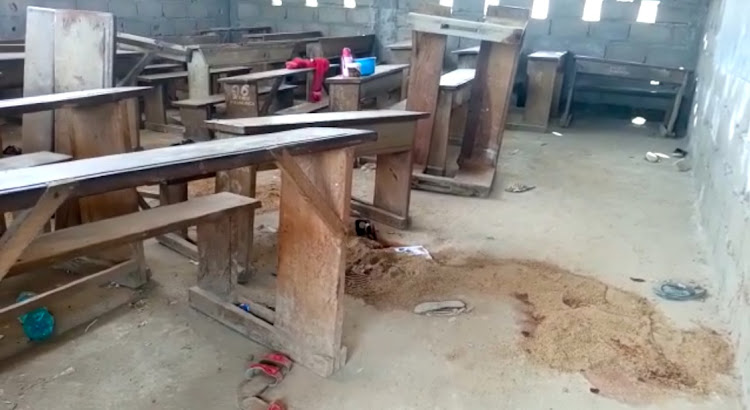 An empty clasroom is seen following a shooting at a school in Kumba, Cameroon October 24, 2020 in this screen grab obtained from a social media video.
Image: MY MEDIA PRIME TV

Gunmen stormed a school in Cameroon on Saturday and opened fire indiscriminately, killing at least six children and wounding about eight more in a region where separatist insurgents operate, officials and parents said.

Arriving on motorcycles and in civilian clothes, the attackers hit the school around midday in the city of Kumba in South West Region, according to the accounts, including from one parent outside the school at the time.

Some children were injured jumping from second storey windows.

It was unclear if the attack was linked to an ongoing struggle between the army and groups seeking to form a breakaway state called Ambazonia in the English-speaking west.

But it was a grim new low in a region that since 2017 has seen hundreds die and thousands displaced because of the conflict, with many children unable to attend school.

"They found the children in class and they opened fire on them," city sub-prefect Ali Anougou told Reuters.

Isabel Dione ran into the school to search for her 12-year-old daughter when she heard about the shooting. She found her on the floor of a classroom, bleeding from the stomach.

"She was helpless and she was shouting 'mum please help me', and I told her 'only your God can save you now'," Dione told Reuters. The girl was rushed to hospital where she is undergoing treatment for a gunshot wound.

The United Nations' Office for the Coordination of Humanitarian Affairs said eight children were killed, some by machete, and that 12 were wounded.

Videos circulating on social media filmed by local journalists showed adults rushing from the school with children in their arms, surrounded by wailing onlookers.

One photo verified by Reuters showed the inside of a classroom, where dried blood had pooled on the floor near some scattered flip-flops.

Gunmen killed five children and badly wounded about nine others when they opened fire in a school in the city of Kumba in Cameroon's Southwest region ...
News
5 months ago

Local education official Ahhim Abanaw Obase confirmed six deaths of children aged between 12 and 14, and added that another eight had been taken to hospital.

Anougou and another official blamed the attack on the secessionists, but did not offer evidence.

Prominent separatist leader Ayuk Tabe described the attack as "inhumane" in a Twitter post and said "anyone responsible for these atrocities must be brought to book."

Still, many armed splinter groups have emerged from inside the separatist movement since 2017, and one voice rarely speaks for all.

Anglophone secessionists have imposed curfews and closed schools as part of their protest against President Paul Biya's French-speaking government and its perceived marginalisation of the English-speaking minority. Rights groups have documented abuses on civilians from both sides.

- Reporting by Blaise Eyong in Kumba and Josiane Kouagheu in Douala