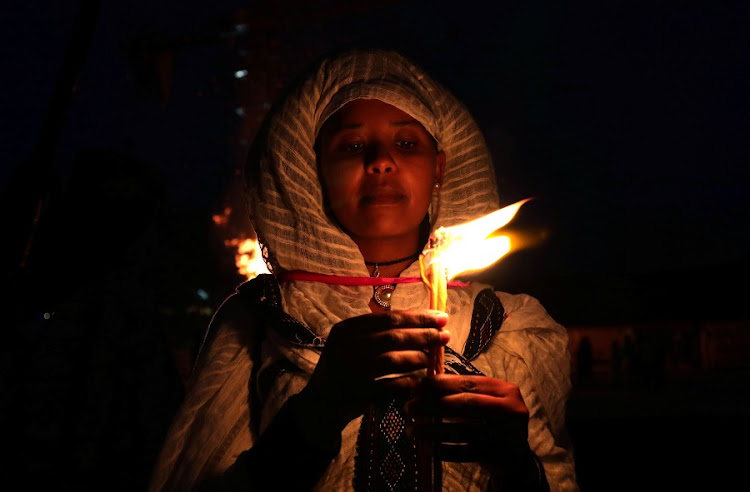 An Ethiopian Orthodox faithful holds a burning candle during the Meskel Festival to commemorate the discovery of the true cross on which Jesus Christ was crucified on, in Addis Ababa, Ethiopia, September 26, 2020.
Image: REUTERS/Tiksa Negeri

Police in Ethiopia's Oromiya region have arrested 503 people on accusations they planned to cause violence during an annual thanksgiving festival this weekend and seized guns and hand grenades, the state-run news agency reported.

State-affiliated Fana Broadcasting also reported on Friday that police and intelligence services had foiled what they said were plans to incite violence in Addis Ababa and other parts of Ethiopia ahead of the Irreecha festival of the Oromo, the country's largest ethnic group.

The latest arrests happened a week after Ethiopia's attorney general said about 2,000 people had been charged over deadly violence after the killing of popular Oromo musician Haacaaluu Hundeessaa in June.

Ethiopia News Agency, quoting Oromiya region police commissioner Ararsa Merdasa, said on Thursday officers seized guns and hand grenades during the arrests, ahead of a celebration in the capital Addis Ababa on Saturday and in Bishoftu in the Oromiya region of Ethiopia on Sunday.

In the violence following the musician's killing in June, at least 166 people were killed. More than 9,000 people were arrested, including some politicians from Oromiya, Ethiopia's most populous province and the home of the murdered singer.

Last year's Irreecha festival in Addis Ababa was held peacefully amid tight security. But in 2016, a stampede, triggered by a clash between police and protesters, at the capital's celebrations left more than 50 dead.

Ethiopia, Africa's second most populous nation, is one of the continent's fastest growing economies and is due to hold elections next year.

Decades of frustration over government repression and democratic reforms by Prime Minister Abiy Ahmed, who took office in April 2018, have emboldened regional power-brokers keen to challenge the ruling party.

Abiy won the 2019 Nobel Peace Prize for his peacemaking, which ended two decades of hostility with neighbouring Eritrea.

But his critics have accused him of heavy-handed tactics - such as mass arrests or the detention of political opponents - similar to those of the regime that preceded him.

Ethiopian Airlines is in talks over possible involvement in the rescue of flagship carrier South African Airways (SAA), the head of the airline told ...
News
1 year ago
Next Article