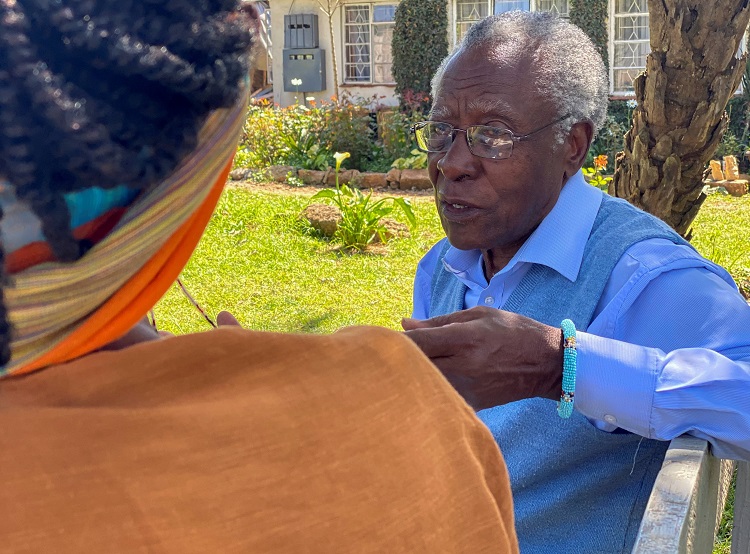 Daniel Sindiyo, whose mother was in the British detention camps of the pre-independence Mau Mau rebellion, talks to his granddaughter Chao Tayiana, a digital historian reconstructing 3D models of the detention camps in Ngong, outside Nairobi, Kenya June 29, 2020.
Image: REUTERS/Edwin Waita

Nearing 100, Gitu Wa Kahengeri clearly remembers the day when, as a prisoner of Kenya's colonial occupier Britain, he wanted to die.

"I was beaten the whole day until I did not feel pain any longer," he said, of one episode of abuse during the seven years he spent in the camps that the British ran in the decade before Kenyan independence in 1963.

The camps, where tens of thousands are thought to have died, are a traumatic but largely forgotten part of Kenya's past.

They were set up to jail activists and sympathisers during the Mau Mau uprising of 1952-1960, in which Kahengeri, born in the 1920s and a Secretary General of the independence movement's Veterans Association, participated.

Using eye-witness accounts, documents and field visits, Kenyan and British historians from the Museum of British Colonialism are now building an online archive of the period, complete with 3D recreations of some of the camps.

They include 27-year-old Chao Tayiana Maina.

"I've been through the public education system ... and not once do I remember hearing about detention camps," she told Reuters. "There was a sense of betrayal. I didn't understand how this was not taught."

The Supreme Court of Appeal (SCA) has upheld the landmark decision by the Land Claims Court to award a large portion of land, including the Fish ...
News
1 year ago

Maina recalls the shock she felt when, a few years ago, she read "Britain's Gulag", an account by American historian Caroline Elkins, who estimates more than 100,000 detainees may have died in the camps, victims of the combined effects of exhaustion, disease, starvation and systematic brutality.

Other historians have put the death toll in the tens of thousands.

"The British government recognises that Kenyans were subject to torture and other forms of ill treatment at the hands of the colonial administration, which we sincerely regret," a British High Commission spokesman in Nairobi said on customary condition of anonymity. "We must live with, and honour, the U.K. and Kenya's shared history, and the pains and joys that it has brought. The work of our people and institutions to share that history is an important part of our relationship."

In 2013, Britain made an out-of-court settlement of 20 million pounds to five claimants represented by the Mau Mau Association, and a public statement of regret for abuses committed.

When Maina delved more deeply, she discovered her own great-grandmother was a prisoner for seven years.

Her grandfather Daniel Sindiyo was only 16 when his mother was taken. "If anyone collapsed (there), it was none of your business. If anyone died there, too bad," the 82-year-old former civil servant said.

Founded in 2018, the online museum is getting a second lease of life from the Black Lives Matter movement catalysed by the May 25 death of George Floyd in U.S. police custody, and its questioning of "official" versions of history.

"We have neglected or silenced certain voices," said Maina. "Thinking we can continue to live without understanding what truly happened is an injustice."

Rhodes might have fallen at the University of Cape Town, but his name will live on in scholarships that allow graduates from around the world to ...
News
1 year ago

Just about every writer this year who dealt with the deepening economic and unemployment crisis in SA has failed to place it in a historical context ...
Opinion
1 year ago

Here are some of Boris Johnson's most controversial quotes.
News
1 year ago
Next Article