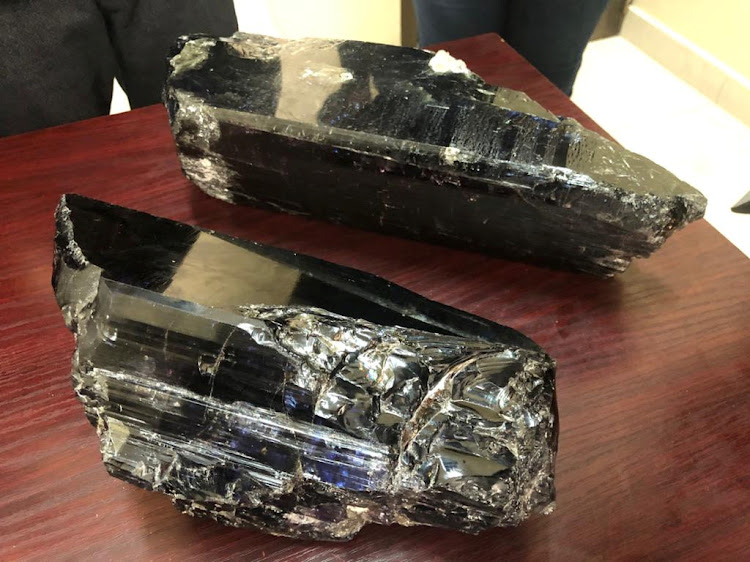 Two tanzanite gemstones - the largest ever found, according to the mines ministry - are pictured at a ceremony attended by senior government officials in Simanjiro district, northern Tanzania, June 24, 2020. The miner who found them was given a 7.74 billion Tanzanian shilling cheque by the government.
Image: Tanzania Ministry of Minerals/Handouot via REUTERS

A Tanzanian subsistence miner hit the jackpot on Wednesday after the government handed him a cheque for 7.74bn Tanzanian shillings ($3.35m or R57m) for the two largest tanzanite gemstones ever found.

The two dark violet-blue gemstones, each about the size of a forearm, were discovered by Saniniu Laizer in one of the tanzanite mines in the north of the country which are surrounded by a wall to control cross-border smuggling of the gemstones.

The first gemstone weighed in at 9.27kg while the second weighed 5.103kg, a mines ministry spokesperson said.

Tanzanite is a gemstone found only in a small northern region of the East African nation.

“Today's event ... is to recognise the two largest tanzanite gemstones in history since the beginning of mining activities in Mirerani,” Simon Msanjila, mines ministry permanent secretary, said at a ceremony in Simanjiro district in Tanzania's northern Manyara region.

Laizer was pictured on Tanzanian television being presented with a large cheque after the Bank of Tanzania bought the gemstones. President John Magufuli phoned to congratulate Laizer live on television.

“This is a confirmation that Tanzania is rich,” Magufuli told minerals minister Doto Biteko.

Tanzania last year set up trading centres around the country to allow artisanal miners to sell their gems and gold to the government. Artisanal miners are not officially employed by any mining companies and usually mine by hand.

Magufuli inaugurated the wall around tanzanite mining concessions in northern Tanzania in April 2018, in an attempt to control illegal mining and trading activities. At the time he said 40% of tanzanite produced there was being lost.