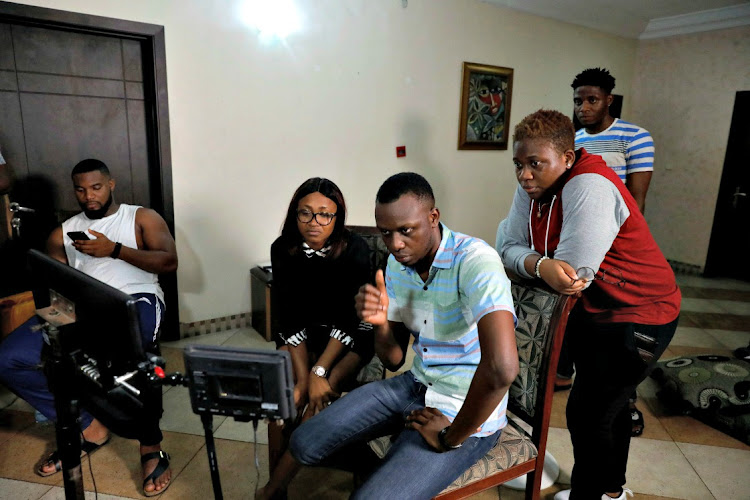 Mary Njoku, the CEO of of ROK Studios, supervises the set of a ROK’s film in Lagos, Nigeria. The global pandemic has left Nollywood in deep trouble, according to industry executives and financial analysts.
Image: REUTERS / TEMILADE ADELAJA

Nigeria's film industry is creeping back to work after lockdown, and one of the first productions to resume is a new television series about a highly infectious disease that has ravaged the world.

Cameras stopped rolling weeks ago due to the coronavirus pandemic, which has killed more than 300,000 people worldwide, including 200 in the West African country.

Better known as Nollywood, the multibillion dollar industry churns out movies and TV shows at a rate second only to India's Bollywood and employs one million people. But productions have had to be stripped right back.

Filming for the TV series Meadows, shot in the capital Abuja, restarted in mid-May after being halted for two months. Its production team, excluding actors, has been cut back to around seven people - around a quarter of the people in a regular Nollywood crew.

"I have to do lots of things myself," said director Samuel Idiagbonya, who is now also in charge lighting.

The crew wear face masks, actors keep their distance from one another as they deliver their lines and undergo regular temperature checks.

The global pandemic has left Nollywood in deep trouble, according to industry executives and financial analysts.

Cinema closures across Nigeria due to the lockdown have been "catastrophic" for the industry, which gets half of its revenue from ticket sales, according to Bismarck Rewane, who heads the Lagos-based consultancy Financial Derivatives.

Cinemas in Nigeria are still shut indefinitely and the consultancy predicts that up to 250,000 people employed in Nollywood, from designers to box office attendants, could lose their jobs.

Moses Babatope, managing director of Film One Entertainment, believes that the pandemic has caused Nollywood losses of around 3 billion naira ($8.33 million) since mid-February.

An increase in home viewing has boosted sales to streaming platforms including Netflix, but meanwhile revenue from other clients such as airlines has dried up, said Babatope, who is secretary of a film industry body.

Nigeria will extend a ban on all flights by four weeks as part of measures to prevent the spread of the coronavirus, a government official told ...
News
1 year ago

The shuttering of the cinema chain he co-founded and which accounts for 60% of his distribution revenue, has forced him to furlough around two thirds of his staff.

"If this goes on much longer, a lot of cinema businesses will struggle to come back, including ours," said Babatope.

Nollywood's films are famed for tales of romance and witchcraft and often depict lavish social gatherings that are the bedrock of Nigerian life.

The scene evolved from visual pulp fiction and poor production in the 1990s to a thriving industry that has grabbed the attention of global entertainment brands.

"It all seems so bleak," Amata said.

But on a mild Wednesday evening in May, a crowded car park in the capital Abuja offered a potential ray of hope as tens of cars lined up facing a big screen - one of around a dozen drive-in cinemas which have popped up around the country.

Charles Okpaleke, the producer behind the Abuja site, said he wanted to respect both cinema and social distancing in a way that was financially viable.

"In every setback there's an opportunity," he said.

The local liquor industry says it’s concerned that SA's ban on alcohol during the lockdown is inconsistent with the global approach.
News
1 year ago
Next Article