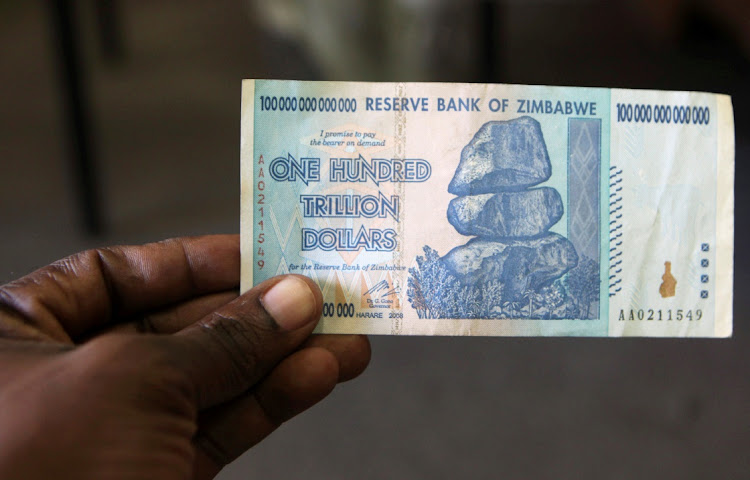 A man holds up for a picture a one hundred trillion Zimbabwean dollars note inside a shop in Harare, Zimbawe in June 2015. Picture: REUTERS/ PHILIMON BULAWAYO

Harare — Zimbabwe’s financial crisis deepened this week after the central bank suspended the services of the country’s largest mobile money operator Ecocash, before partially restoring it.

Zimbabwe’s cashless economy conducts the bulk of transactions via electronic and mobile money systems dominated by Econet’s Ecocash, which has a 95% market share, moving hundreds of millions of the local currency, a day.

The cash shortages have resulted in the unorthodox practice of “selling cash” becoming rampant in the country.

With the ailing economy unable to create jobs, thousands of youths have taken to selling cash or changing money at the parallel market as a means of survival.

In exchange for hard currency, one is made to surrender up to 60% of their mobile balance as the transfer fee.

Although the premium is high, most desperate citizens have no choice but to carry out such transactions because cash is required when commuting to work or buying specified basic goods.

On Tuesday finance minister Mthuli Ncube said the rampant business of selling cash had contributed to weakening of the local currency.

“The feeling here was that on the cash-in, cash-out transactions, there was an implicit exchange rate because of the discounts that these agents were applying, as high as 55%  or 60%  on local currency balances.

“That’s what brought that directive from the RBZ. That is what it is trying to deal with, to make sure that discounts for cash do not become yet another rate,” said Ncube.

The Reserve Bank of Zimbabwe (RBZ) on Wednesday partially set aside a decision to ban the Ecocash mobile money payments which has largely been abused by dealers who charge a mark-up of up to 60% to exchange mobile money with cash.

The RBZ on Monday banned the Ecocash “cash-in and cash-out” services, arguing that the mobile money transfers were a big contributor to the fall of the local currency against the US dollar.

Cash-out is a process of transferring mobile money into hard cash while cash-in refers to wiring money into a mobile wallet.

Catherine Mazorodze was overworked and tired when she quit her job as a farmworker in Zimbabwe’s Manicaland province.
News
2 years ago

Banning Ecocash’s cash-in and cash out services had a negative effect on millions of Ecocash subscribers who rely on the service, while thousands of agents employed by the company also cried foul as they were moved out of business.

Cassave SmartTech Zimbabwe, which operates Ecocash has approached the courts to nullify the restrictions on transactions.

The matter is set to be heard before a Harare judge on Friday.

Ecocash’s lawyers are seeking a temporary interdict to the RBZ’s directive, as they argue that that the central bank acted unlawfully.

They also argue that Ecocash has come to the rescue of Zimbabwe’s economy due to the critical shortages of cash.

“The directive by the defendant to shut down the Ecocash's cash-in and cash-out facilities is ultra vires Section 10 of the National Payments Systems Act under which it purports to have been made,” Ecocash’s lawyers said.

On Wednesday, the RBZ partially lifted the ban and said cash-out or cash-in transactions could be resumed, albeit with a $100 (about US$6) cap to minimise abuse.