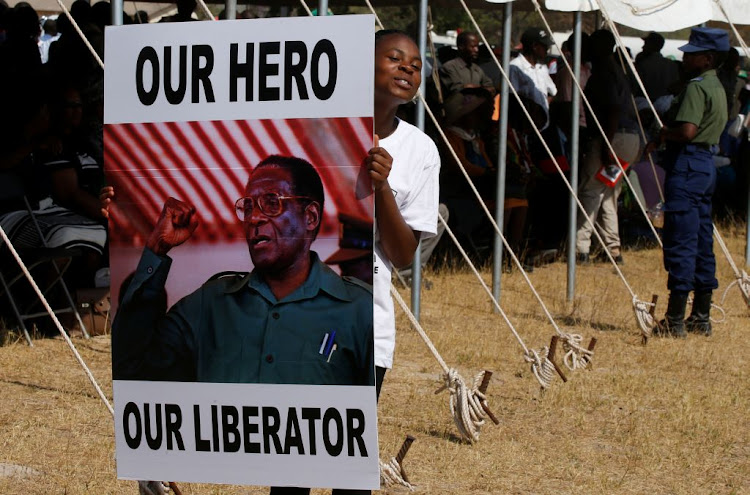 A mourner holds a poster as the body of former Zimbabwean president Robert Mugabe arrives in Murombedzi, near his rural home village of Kutama, Zimbabwe, on September 16 2019.
Image: REUTERS/Philimon Bulawayo

Former Zimbabwean leader Robert Mugabe died from cancer after chemotherapy treatment was stopped because it was no longer effective, a state-owned newspaper quoted President Emmerson Mnangagwa as saying, the first time the government has given the cause of his death.

Mugabe, who led Zimbabwe to independence and crushed his foes during nearly four decades of rule that impoverished his country, died on September 6 aged 95 in Singapore.

Mnangagwa told ruling party supporters in New York where he is attending this week's United Nations General Assembly that Mugabe had cancer, but he did not disclose the type.

Mugabe is still to be buried because the government is building a mausoleum at Zimbabwe's national shrine reserved for liberation war fighters in the capital. His body is being kept at his Blue Roof residence in Harare.

"Treatment had stopped, doctors had stopped treatment, chemotherapy, one, because of age and also because the cancer had spread and it was not helping anymore," Mnangagwa said in comments carried by The Herald newspaper on Monday.

In 2011, WikiLeaks released US diplomatic cables that said Mugabe had prostate cancer that had spread to other organs, which government officials denied.

During his time in power, and before he was forced to resign after a coup in November 2017, Mugabe frequently travelled to Singapore to seek treatment.

Robert Mugabe does not deserve any praise

The praise that was heaped on Robert Mugabe by Thabo Mbeki at Tuesday's memorial is unfortunate, undeserving, misplaced and cannot go unchallenged.
Opinion
1 year ago

Military takes over Zim hospitals as doctors strike over 'abduction'

In a bid to contain a crippling doctors’ strike in Zimbabwe, the country's government has deployed doctors from the military to state hospitals.
News
1 year ago
Next Article