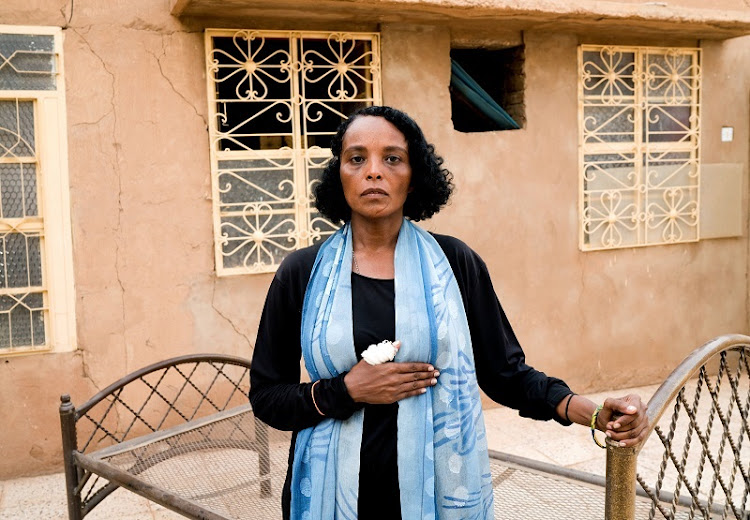 After six years abroad, Khadija Saleh returned to Sudan in March to join protesters in the streets demanding change.

She was taking part in a sit-in near the Defence Ministry in Khartoum on June 3 when security forces stormed in. The area had become a centre for anti-government protests.

Saleh said she was beaten with sticks, and still wears bandages on her wounds.

"I came back from a safer place because I want a better future for this country," the 41-year-old said.

Women were a driving force during months of protests against President Omar al-Bashir's 30-year rule, before he was replaced by a military council in April.

But the protests didn't stop as demonstrators demanded the military swiftly hand power to civilians, leading to a stand-off and then a crackdown.

Nahid Gabralla, a 53-year-old activist, said she was beaten and threatened with rape during the June 3 raid.

"Sudan can be better," she said. "My daughter deserves to live in a nice country ... We will fight for a democratic Sudan, real change and for our rights."

Physicians for Human Rights, a U.S.-based group that investigates rights violations, cited local medics as saying women had their clothes torn off and were raped, though the sexual violence was hard to quantify.

"They know that if they humiliate the women, they will humiliate the whole people," said 42-year-old activist Hadia Hasaballah. "None of the Sudanese women will officially say that they were raped because of the stigma."

It was not possible for Reuters to independently verify the reports of rape. A spokesman for the military council could not be reached for comment. The council has previously denied that rape took place.

The head of Sudan's Human Rights Commission, which is appointed by the presidency, said it had launched an investigation into violations committed during and after the dispersal of the sit-in, which it condemned, without giving details.

Under Bashir's rule, women's lives were tightly controlled by men. Morality laws meant a woman could be arrested for wearing trousers.

For that reason, 35-year-old Mahi Aba-Yazid wore trousers while she campaigned for change at the sit-in. She believes she was beaten more because of her choice of fashion.

"There was already a bullet in my arm. I was bleeding but they continued to beat me," she said.

Duha Mohmed, a 23-year-old student who escaped the sit-in raid before returning to help the injured, said she also wanted a life in which she could make her own choices.

"I don't want to wear a headscarf, but it is not my choice. I want my right to wear what I want."

Amel Tajeldin, a 41-year-old mother of four, said she and her husband took turns watching their children.

"While it was his turn to look after the children, I took part in the demonstrations," she said.

She had been teaching songs to street children in a makeshift tent at the sit-in. During the June 3 raid, members of the paramilitary Rapid Support Forces (RSF) shouted at her and other protesters and told them to flee. "We ran. We were surrounded by soldiers and policemen," she said.

Both her arms are now wrapped in bandages. "While we were running, they beat us. To protect my head, I used my hands. This is why my two arms are broken," she said. "The ones like us beaten by police were lucky, the ones beaten by RSF members were brutally injured."

The military council has said excesses were committed as the sit-in was cleared. It said these are being investigated and that those responsible will be held accountable.

Despite the violence, Sudan's military rulers and a coalition of opposition and protest groups agreed last week to share power for three years ahead of elections.

But Nagda Mansour, a 39-year-old translator who was imprisoned for 75 days after attending a demonstration in December, said it was difficult for many to accept the idea of negotiating with the military because of its leadership's involvement in the war in Darfur.

The RSF, headed by the deputy leader of the council, Mohamed Hamdan Dagalo, are accused of committing atrocities in Darfur. Officials in the past have denied those accusations.

The power-sharing agreement with the military council marks "the beginning, not the end," said Mansour. "We as human rights defenders want to have a guarantee for transitional justice in Sudan."

Manal Farah, 49, lost her son, a 22-year-old university student, in the violence. She said he insisted on protesting even though she asked him to stay home.

"The aim of the government is to convince mothers of revolutionaries to prevent their sons from joining the revolution. But no matter what we say to them they will never stop before achieving their objectives," Farah said.

"When he started in university he started to ask why there is corruption in Sudan. He said there must be a change, a new Sudan ...I pray for my son's dreams to come true."