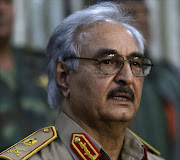 Russia has said it is not taking sides in the fighting in Libya but behind the scenes, experts say, Moscow is firmly backing strongman Khalifa Haftar.

Haftar, whose forces launched a surprise assault on the capital Tripoli last week, has visited Moscow, met with senior officials and even speaks some Russian.

Moscow insists it backs no one in the North African nation's complex conflict and has called for calm on "all sides" after Haftar launched an assault that has left dozens dead and forced thousands to flee their homes.

But for Russian defence analyst Alexei Malashenko, there is no doubt who Moscow favours in Libya.

But he added that Russia is ready to throw its diplomatic weight behind Haftar if he succeeds in taking Tripoli from the internationally backed Government of National Accord (GNA).

"It all depends on if he will be able to take Tripoli, and if there will be a lot of bloodshed in doing so," Malashenko said.

Russia was a longtime ally of ex-Libyan leader Moamer Kadhafi before his 2011 overthrow threw the country into chaos.

When NATO launched a military campaign to support opposition forces against Kadhafi, Russia along with China abstained in a UN Security Council vote on the intervention.

As Western powers later built up ties with the GNA, Russia felt cheated and moved to back Haftar after he returned from 20 years of exile.

"Haftar is ideologically close to Russia," said analyst Alexander Shumilin of the Centre for the Analysis of Middle East Conflicts in Moscow.

"He is supplied with Russian weapons and gladly takes them. He is Moscow's man," he said.

In a sign of that support, Moscow on Sunday blocked a UN Security Council statement that would have called on forces loyal to Haftar to halt their advance on Tripoli.

It is not clear how much concrete support Russia has given to the strongman, but British newspapers The Sun and The Telegraph reported that private Russian military contractors have been deployed to Libya.

Citing intelligence and oil industry sources, the papers said fighters from the Wagner private military company - widely reported to have deployed in Syria - were in Libya.

The group has also provided Haftar's forces with artillery, tanks, drones and ammunition, they reported.

Malashenko said Russia was keen to secure its interests in Libya, where Moscow had secured multi-million-dollar contracts for arms sales and oil projects before Kadhafi's overthrow.

It has hedged its bets, meeting with other officials like Nasser el-Derssi, the economy minister, who said in Moscow last October that he wanted to buy a million tons of Russian wheat and renew a railway construction project worth $2.8 billion (R39.46. billion euros).

"There are economic interests: Libya represents oil. Russia has been going after it for a long time," Malashenko said.

Moscow has also been emboldened to "demonstrate its presence" in Libya, he said, after successfully backing President Bashar al-Assad's regime in Syria and boosting its influence in several African countries.

And as in Syria, Venezuela and elsewhere, President Vladimir Putin is keen to show off Russia's growing international clout, Malashenko said.

"A victory for Haftar would be extremely unpleasant for the US where he is seen as Putin's man."