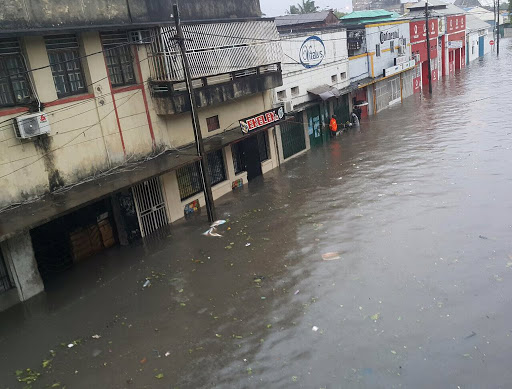 The streets of Beira in Mozambique after tropical storm Desmond made landfall on January 22, before the arrival of for tropical cyclone Idai, which has proceeded to wreak havoc and kill at least 70 people.
Image: Twitter/TinoMalinga

A powerful tropical storm made landfall in Mozambique on Thursday evening, battering a coastal city with heavy rain and wind at speeds of up to up 170 km an hour and injuring several people.

In Beira, a city of around 500,000 people and a gateway for imports to landlocked countries in southeast Africa, Twitter images and television footage showed billboards and rooftops blown off, trees snapped and electricity cables strewn across the streets.

In the northern Zambezi province, villages along the coastline were cut off from the mainland by the storm surge.

Residents in central Mozambique were on Thursday bracing for a tropical cyclone described as "extremely dangerous" by weather experts, with imminent ...
News
2 years ago

Cyclone Idai dumped more water and brought destruction on areas where scores of people have already been killed and tens of thousands displaced by floods over the past week.

The Mozambican government's emergency services have yet to give an update on the situation. The storm was also expected to hit parts of neighbouring Malawi.

"We don't have any communications from the area. This is an intense tropical cyclone, and I think there's a lot of damage to infrastructure which is probably responsible for the loss in communications."

As it moves inland on Friday, the weather system will weaken but is still expected to result in significant rainfall and widespread flooding over the Sofala and Manica provinces, the extreme eastern parts of Zimbabwe and southern parts of Malawi, the South African Weather Service said.

Mozambique has seen deadly floods worsened by devastating hurricanes in the past, including in 2000 and 2007.

Cyclone Eline, which hit the country in February 2000 when it was already devastated by its worst floods in three decades, killed 350 people and made 650,000 homeless across southern Africa.

Mozambique has significant offshore liquefied natural gas projects underway in the north, but these are currently out of harm's way.