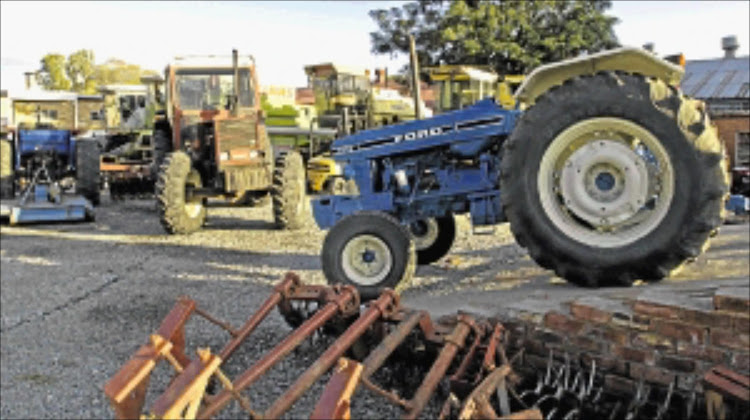 Young Africans at the forefront of lending the agriculture sector some pizzazz.
Image: RUSSELL ROBERTS

In a long-sleeved shirt and jeans, expertly navigating eastern Rwanda's bumpy back roads in a white four-wheel drive, Dieudonne Twahirwa looks nothing like the stereotypical African farmer.

The 30-year-old owner of Gashora Farm knows what a difference that makes.

"You need more role models," he said, standing among knee-high rows of chilli plants. "If you have young farmers, they have land and they drive to the farm, (others) think, 'Why can't I do that?'"

"You have to link (farming) with entrepreneurship and real numbers," he told the Thomson Reuters Foundation.

Many young Africans are abandoning rural areas, choosing not to toil in the fields - a job made tougher by climate change.

But Twahirwa is one of a growing band of successful farmers working to jazz up agriculture's image on the continent.

Some 1,000 farmers now produce chillies for him. He is starting a fourth farm of his own, and exports fresh and dried chillies and oil to Britain, the United States, India and Kenya.

Statistics South Africa has started its Census of Commercial Agriculture in South Africa.
News
2 years ago

Africa has the world's youngest population and 65 percent of its uncultivated arable land.

Yet accessing land and loans is difficult, while African productivity is low with crop yields just 56 percent of the international average, according to the United Nations.

"Agriculture is mainly associated with suffering and no young person wants to suffer," said Tamara Kaunda, who has put her career as a doctor on hold to buck the trend.

She believes African agriculture needs a make-over to shed its old-fashioned image of backbreaking work with a hoe.

Getting young people involved in agriculture does not mean they have to work on a farm, said Nigerian Olawale Rotimi Opeyemi, 29, whose agribusiness company JR Farms Africa has projects in Nigeria, Ivory Coast and Rwanda.

For example, in coffee production, the beans go from the farm to the washing station, then to be separated from the husk.

"There are people in the coffee value chain who just build washing stations and lease them. You just have to find a place to plug in," he said.

Stepping up the use of mechanised equipment and new technology is another key way to attract young people - and will also improve productivity, experts say.

Today, 50 to 85 percent of farm work in Africa, such as ploughing and sowing, is done manually, according to the Malabo Montpellier Panel, a group of international agriculture experts.

From servicing farm machinery to operating equipment for processing, packaging and distribution, mechanisation would "open up a lot of business opportunities for young people", said Ousmane Badiane, the panel's co-chair and Africa director at the International Food Policy Research Institute.

"People need jobs not for only three months but revenue for the whole year," he said.

Rwandan Felicien Mujyambere, 35, was ready to migrate from his remote northern village after his wife died and his family's income dropped.

But in 2017, he received a chick hatchery from the United Nations' Food and Agriculture Organization (FAO) under a project that provides rural youths with business opportunities.

Since then, he has used the profits from selling eggs and chicks to buy another hatching machine, as well as start a banana and maize farm and a bee-keeping business.

He now employs 10 people, and has almost tripled his monthly income.

Eric Hakizimana, meanwhile, dreamed of becoming a government official but after high school, a lack of jobs led him to sign up for the FAO project.

He received about 300 chickens, a coop and a hatchery.

At 27, he has three times as many birds and is building a new coop.

Most young men in his village in eastern Rwanda move to the capital, or even Kenya and Uganda to look for work, he said.

"But now there are many who want to do this," he added.

Interest rates are high and few banks are willing to take the risk of lending to them, said Ruramiso Mashumba, chair of the Zimbabwe Farmers' Union youth wing.

Interest rates of 30 percent or more are not uncommon, farmers and business owners told the Thomson Reuters Foundation.

"Even if you have been successful, you still cannot get finance to grow," said Mashumba, 33.

The International Fund for Agricultural Development is trying to address this financing gap with a new fund.

Meanwhile climate pressures are adding to farmers' woes, with extended dry periods, erratic rainfall and floods leading to crop losses and declines in yields - problems scientists predict will worsen as the planet warms.

Yan Kwizera, a Rwandan tech entrepreneur, said more political leadership was needed at the top so that farmers do not feel they are facing challenges alone.

"How many presidents do you know in Africa who own land and are cultivating?" he said. "They send their kids to learn investment banking, medicine, law, international development. Nobody's doing agriculture."