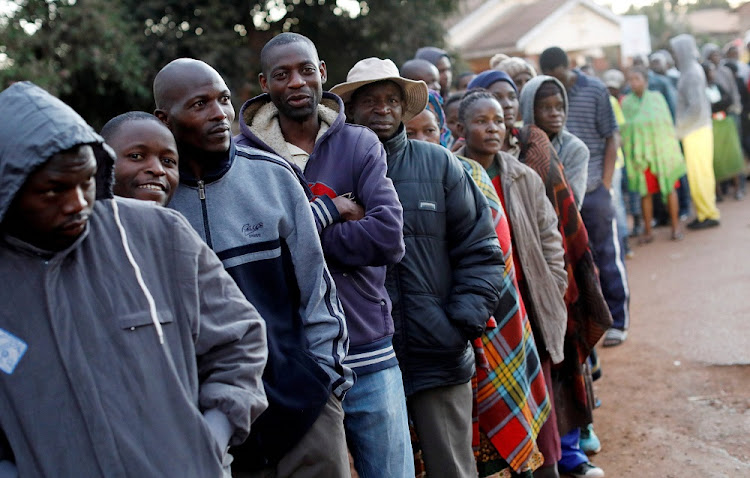 The Zimbabwean Constitutional Court will decide on Friday on the elections.
Image: REUTERS/Mike Hutchings

Zimbabwe’s Chief Justice‚ Luke Malaba‚ sitting with a full bench of nine judges of the Constitutional Court‚ on Wednesday said that the judgment on the country’s disputed presidential elections would be handed down on Friday at 2pm.

The dispute which spilled into court was heard on Wednesday morning by the top court. The hearing continued until about 7pm on Wednesday evening.

Nelson Chamisa‚ the leader of the MDC Alliance‚ is challenging the outcome of the election and on August 10 brought an election petition seeking that the results be set aside.

The incumbent‚ President Emmerson Mnangagwa‚ was declared winner of the poll with 50.8% of the vote. Chamisa received 44.3% of the vote.

The top court has 14 days by law to make a ruling on the election. The last day for this provision is this Friday.

Zanu-PF on Wednesday filed its opposing papers to the court challenge to the presidential election results.
News
2 years ago

Earlier in the day‚ the MDC Alliance’s legal representative‚ Thabani Mpofu‚ in his submissions prayed that the court nullify the result based on inflation of numbers in Mnangagwa’s favour‚ ghost voters and a faulty voters’ roll.

The main premise of Mpofu’s argument before the court was that “the numbers don’t lie” and said they there was an inconsistency in the tally between the votes cast and the number of registered voters. He further claimed that in 16 constituencies‚ the results given by the electoral commission were starkly similar.

In response‚ Lewis Uriri‚ Mnangagwa’s legal representative‚ said the case by the applicant had no merit as evidence was either not submitted or submitted late after the seven-day period in which an application must be filed to the court.

Throughout the proceedings‚ lawyers sympathetic to the two legal representatives of the MDC Alliance and Zanu-PF would clap their hands in support‚ as they watched proceedings from a giant marquee outside the court.

Inside the marquee were three large TVs from which proceedings inside the courthouse were beamed live.

The proceedings were beamed by the Zimbabwe Broadcasting Corporation.

Douglas Mwonzora‚ the MDC‘s secretary-general‚ told TimesLIVE on the sidelines of the court proceedings that they were “very confident” that the court would rule in its favour.