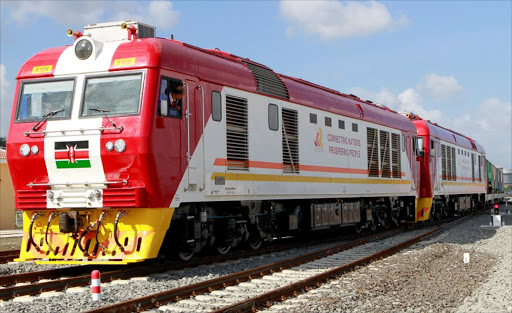 A cargo train is launched to operate on the Standard Gauge Railway (SGR) line constructed by the China Road and Bridge Corporation (CRBC) and financed by Chinese government in Kenya's coastal city of Mombasa, May 30, 2017. REUTERS/Stringer

Kenyan authorities have arrested the head of the agency that manages public land and the boss of the state railway on suspicion of corruption over land allocation for the new $3-billion flagship Nairobi-Mombasa railway.

The line connecting the capital with East Africa’s main port was funded by China and is one of the biggest infrastructure projects of President Uhuru Kenyatta, whose government this year embarked on an anti-corruption drive.

Mohammed Abdalla Swazuri, the chairman of National Land Commission, was one of 18 officials, businesspeople and companies named in a statement listing arrests that was posted on Saturday on the prosecutor’s office’s Twitter feed. Also arrested was Atanas Kariuki Maina, managing director of the Kenya Railways Corporation.

Opposition leaders and Kenyan economists have criticised the railway’s funding for increasing the country’s debt burden, which the IMF estimated at between 54-55% of economic output (GDP) in the 2017-18 fiscal year.

The investigation that led to the arrests centres on allegations that officials siphoned taxpayer money through phoney compensation claims for land used for the railway, said a statement from the anti-corruption agency.

It did not spell out who made the allegations. Analysts and businesspeople say Kenya, East Africa’s richest economy per capita, loses a significant percentage of its annual GDP to corruption and it is hard to do business without paying bribes. Public prosecutor Noordin Mohamed Haji ordered the arrests and said in the statement he was preparing to charge the officials.

Reuters was not immediately able to contact representatives of Swazuri and Maina for comment. Kenya last year inaugurated the more than $3 billion railway. No Chinese companies or individuals were named in the prosecutor’s statement.

Kenya has been hit this year by a spate of scandals related to the alleged theft of hundreds of millions of Kenyan shillings (millions of dollars) by officials from government bodies.

Haji, appointed by Kenyatta earlier this year, is bringing charges against dozens of state officials and businesspeople in a number of court cases that have not yet begun.