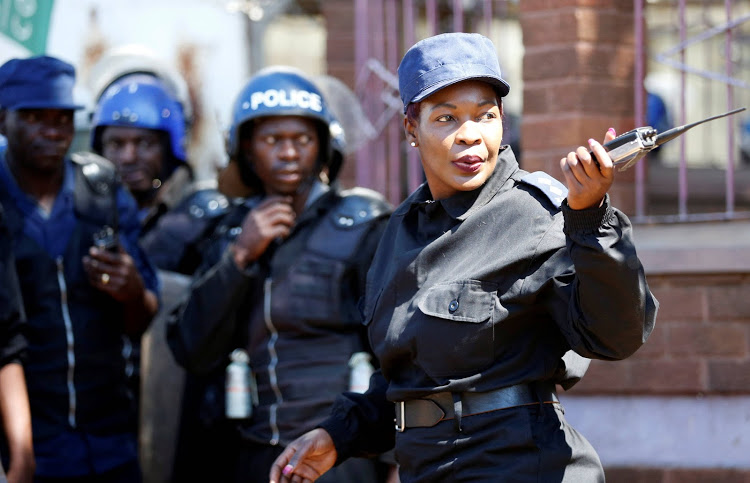 Police officers keep watch over supporters of the Movement for Democratic Change (MDC) opposition party of Nelson Chamisa as they march on the streets of Harare, Zimbabwe
Image: REUTERS/Siphiwe Sibeko

A Zimbabwe media lobby group has criticised the police for blocking local and foreign journalists from attending a press conference convened by the opposition MDC Alliance party in the capital Harare on Friday.

The Zimbabwe chapter of the Media Institute of Southern Africa (MISA) said in a statement that the government should uphold the right of access to information and freedom of expression.

Media‚ Information and Broadcasting Services Minister Simon Khaya Moyo arrived at the hotel to tell police to leave the media alone so that they could attend the meeting.

The police allegedly mistook the press conference for a rally and later issued a statement apologising for the incident.

But MISA said the “justification” by the police was suspicious‚ “since the media conference was publicised as such ahead of time”.

“MISA Zimbabwe reminds the government that the right to access to information‚ free expression and media freedom remain fundamental rights even in times of perceived public unrest as provided under sections 61 and 62 of the Constitution of Zimbabwe. Attempts to undermine or prohibition of the enjoyment of such rights cast the country in bad light locally and internationally‚” the statement read.

“It is the obligation of the government‚ through its various state institutions‚ to uphold and defend the constitution during times of peace and unrest.”