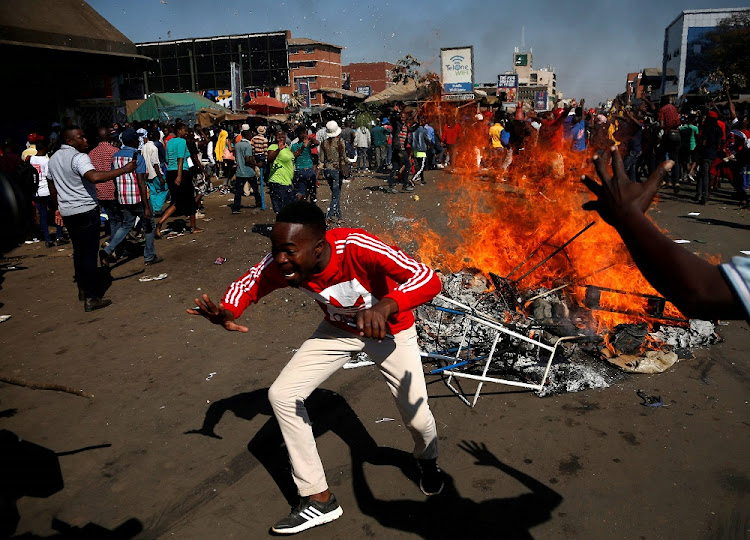 Supporters of the opposition Movement for Democratic Change party (MDC) of Nelson Chamisa react as they block a street in Harare, Zimbabwe, August 1, 2018.
Image: REUTERS/Siphiwe Sibeko

“We categorically denounce the excessive use of force against unarmed civilians,” former Ghanaian president John Mahama said in a statement on behalf of the Commonwealth.

The Commonwealth also urged the Zimbabwe Electoral Commission to expedite the announcement of the results of the presidential vote.

Soldiers patrolled the streets of Harare on Thursday a day after three opposition protesters were killed in post-election clashes that dashed President Emmerson Mnangagwa’s hopes of ending Zimbabwe’s reputation for political repression.

Many shops were closed on Thursday morning and the pavements quiet. Several streets were still strewn with rocks and the charred remains of fires. Soldiers loitered at intersections.

“Yesterday was a very sad day for Zimbabwe,” said minibus driver Gift, glancing over his shoulder as a soldier smoking a cigarette looked on.

“We hope things remain quiet and we can all just forget about this election. We don’t know if it was fair. The government will do what they want.”

The deployment of soldiers and their shooting and beating of unarmed protesters is likely to set back efforts to end Zimbabwe’s pariah status in the wake of the army’s removal of longtime leader Robert Mugabe in a coup last November.

Mnangagwa blamed the violence on the opposition Movement for Democratic Change, led by Nelson Chamisa, who announced on Twitter on Wednesday that he had “won the popular vote“.

Chamisa provided no details or concrete evidence of rigging.

The website of the election commission, which is expected to start announcing presidential election results on Thursday, was offline after being taken out by unidentified hackers overnight.

Amnesty International called on the government to launch a prompt investigation into the army’s actions.

“It is unfortunate that this election has descended into bloodshed, which could have been avoided if security forces had exercised restraint against protesters,” the London-based human rights organisation said.

It said that by using live ammunition against unarmed protesters, “the army has broken the very same rule of law that they should protect“.