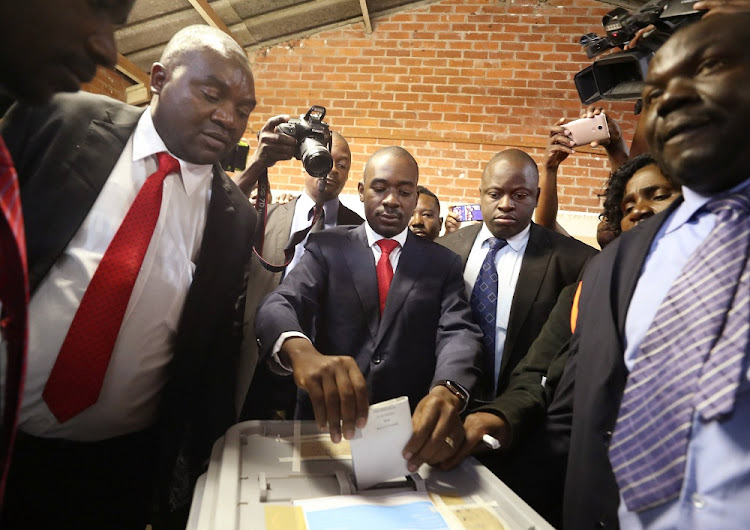 A celebratory mood greeted the man who wants to be Zimbabwe's next president as he arrived in the country's capital to cast his vote in a historic poll.

"Chamisa‚ Chamisa" chanted a large crowd as Nelson Chamisa was ushered to the front of a long queue and entered Kuwadzana 1 Primary School in the west of Harare.

Chamisa‚ the leader of the MDC Alliance‚ is in a tight race with the ruling Zanu-PF's Emmerson Mnangagwa‚ who took the reigns from Robert Mugabe in an ouster last year.

"I know that we are winning. We have won this election‚" Chamisa told a throng of journalists and supporters after voting.

Zimbabweans based in South Africa want to vote for change

For Bright Madaya today's election in his country will in the future determine whether he will return to SA or not.
News
2 years ago

Supporters responded: "We are already celebrating. We are ready for this new democracy." About 20 minutes after arriving‚ Chamisa was ushered back into his unmarked black Range Rover. As he left‚ supporters shouted "bye‚ bye" and chanted "chisa‚ chisa".

A less pleasant experience greeted Bridget Mukura in Mutare‚ Zimbabwe's fourth-largest city. The elderly widow was turned away after her name could not be located on the voters' roll‚ which the opposition has frequently complained about.

Mukura said she had registered at Dangamvura Primary School in Ward 9 in the Dangamvura-Chikanga constituency in Mutare.

The constituency has 15 candidates‚ the highest number of aspiring parliamentarians in Manicaland province.

Mukura was one of the early birds to arrive. At 6am‚ 36 people were already at the polling station‚ an hour before it would officially open for the historic elections.

"I am going back to collect my registration slip to prove that I registered‚" Mukura could be heard saying to the polling agents.

By the time she left the polling station at 7:17am‚ over 50 locals had cast their votes.

An early high turnout of voters characterised almost every polling station in the constituency. In Mutare Central‚ over 70 voters queued outside the Sakubva flea market polling station by 7:30am.

There were no traders at nearby flea markets‚ where over 1‚000 second hand clothes dealers ply their trade.

Only a handful of fruit and vegetable vendors at Sakubva Stadium and another flea market at Bako Tavern‚ which trades in second hand shoes‚ were seen pitching their tables.

"I will go and vote. My polling station is nearby‚" said Misheck Mukudu‚ a fruit and vegetable vendor.

From Sakubva to the city centre‚ there were no long distance travellers‚ while shops were closed.

Lawrence Chatikobo said he had decided to vote early in order to allow himself time to do his other business.