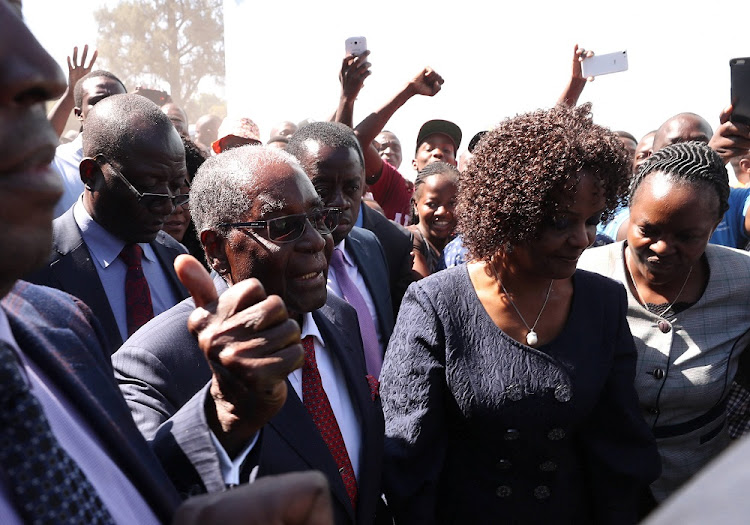 Former Zimbabwe president Robert Mugabe cast his vote at Mhofu primary school in the Harare suburb of Highfield just after 1pm‚ amid chants of “Gushungo” - his clan name - by voters. He was accompanied by his wife Grace and their first child‚ Bona.

At a media conference at his mansion in Borrowdale on Sunday‚ Mugabe made it clear that he would not vote for Zanu PF. He said the party had “tormented” him.

Mugabe‚ greeted polling officers‚ but did not speak to the throngs of journalists gathered at the polling station to witness him casting his ballot.

Grace and Bona watched as he checked his name on the voters roll.

On Sunday‚ at their Blue Roof mansion‚ Bona told this publication on the sidelines of her father’s address to the media that she too would “definitely” vote‚ although refusing to indicate who her preferred candidate was.

Eunice Sandi Moyo‚ the interim leader of the National Patriotic Front who was also present at the Mugabe media briefing‚ said in an interview that she expected the voice of the people to be heard after Monday’s vote. “I can’t comment on what Mugabe has just said‚ but I can say we look forward to having the people’s will to be respected and their choice adopted on Monday‚” she said.

After a 37-year-long rule in Zimbabwe‚ former ruler Robert Mugabe is upset that the administration of his protégé‚ Emmerson Mnangagwa‚ has not yet ...
News
3 years ago

Tensions were high in Zimbabwe on Monday after former president Robert Mugabe announced on Sunday that he would not be voting for the ruling Zanu-PF.
News
3 years ago

Mugabe said on Sunday both women did not present much of a contest in this election. Instead‚ his preference was for MDC Alliance leader Nelson Chamisa.

But after casting her vote in Makokoba in Bulawayo‚ Khupe said she believed that she stood a chance in the race. There are 23 candidates contesting for president.

“I am feeling great. I have had conversations with people and they believe that I will bring development‚” she said.

Mujuru cast her vote in Harare at Oriel Girls High School and then left the polling station.

In Masvingo West‚ at Mudavanhu secondary school‚ polling ended early. 290 voters had cast their votes by 11 am‚ according to several officials on site.

Only 350 voters were expected to cast their votes at that particular polling station.

At New Donnington farm owned by former Reserve Bank of Zimbabwe governor Gideon Gono‚ a veld fire disrupted polling as police and polling agents joined the masses in trying to put out the fire. At the time‚ less than 20 people had voted.