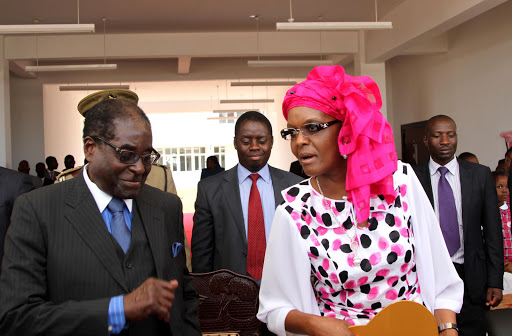 Students at the flagship University of Zimbabwe (UZ) demonstrated on campus on Monday‚ demanding that Grace Mugabe's doctorate be recalled and her husband removed from office.

President Robert Mugabe is the chancellor of all ten of Zimbabwe’s state universities. While under purported house arrest on Friday‚ he appeared at the Zimbabwe Open University (ZOU) graduation‚ but Midlands State University‚ Bindura University and UZ are yet to hold their ceremonies.

Last year‚ Mugabe was heckled during a graduation ceremony at UZ by student leader Tonderai Dombo and other graduating students with huge placards. They were taken into custody by state security operatives‚ and their leader faced criminal charges.

However‚ today the demonstration was done in a free atmosphere‚ as all forces in Zimbabwe push for the end of an era.

"We won’t write examinations until he steps down and his wife's degree is revoked‚" a voice boomed from the public address system on campus.

SA could be one option for spendthrift first lady but...
News
4 years ago

A UZ medical student‚ @cutesy_tash‚ tweeted: "Noise at UZ over start of exams and Grace's PhD. Maybe my dream about exam postponement is coming true."

Others added that forgoing exams is a small price to pay for the national interest. When news of a "coup that was not actually a coup" filtered through last Tuesday morning‚ UZ cleared the campus and exams were postponed until further notice.

Grace Mugabe's political career started in 2014‚ after she was awarded a Doctor of Philosophy in sociology.

Her thesis has never been made public‚ and according to university records‚ she graduated three months after registration for a programme that normally takes at least three years to complete.