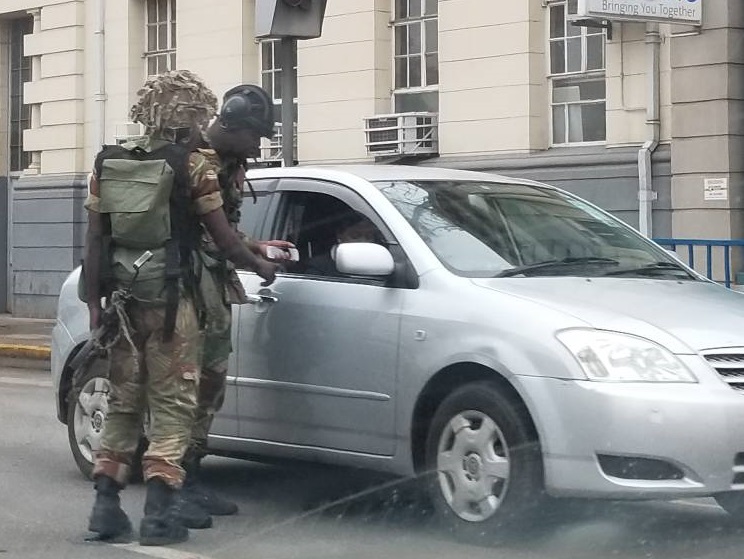 A number of Zimbabwean cabinet ministers have been arrested after the military made a show of force in the capital Harare‚ according to sources.

Loud explosions and the sound of gunfire crackling in the elite neighborhood of Borrowdale throughout the night heightened fears that a military crackdown was under way.

Several sources said that the military had arrested the leading figures of the so-called G40 faction in the ruling Zanu-PF‚ led by First Lady Grace Mugabe.

The military said in a statement that President Robert Mugabe was “safe and sound”. This came after armed personnel first began moving military vehicles into Harare on Tuesday.

The state broadcaster‚ the Zimbabwe Broadcasting Corporation in Pocket Hills in Harare‚ was seized by the military at 4am.

Army spokesperson Major General Sibusiso Moyo announced that the military was now in charge for the purpose of ensuring that it dealt with the “criminals” that had surrounded Mugabe.

“We are only targeting criminals around him [Mugabe] who are committing crimes that are causing social and economic suffering in the country in order to bring them to justice‚” Moyo said.

Mugabe has in the past spoken out against any military involvement in civilian affairs and given the stern rebuke that “politics leads the gun” in an attempt to tame his army generals’ interest in political affairs.

However‚ tensions escalated after Mugabe fired his long-time ally and former deputy Emmerson Mnangagwa last week on grounds of disloyalty and a plot to take over power from him‚ triggering a pushback by the army generals.

Zimbabwe’s military said it had seized power in a targeted assault on “criminals” around President Robert Mugabe.
News
4 years ago

Army commander Constantino Chiwenga this week warned that the military would “step in” to deal with the spate of purges that had gripped the ruling party‚ ordering Mugabe to reverse his expulsions.

Zanu-PF’s youth league‚ led by Kudzai Chipanga‚ on Tuesday morning dared the military and insisted that it had no place in civilian affairs.

The military then began unexplained deployments of armoured vehicles from the Inkomo barracks on the outskirts of Harare‚ which attracted public attention and sparked a social media frenzy.

In an attempt to downplay the social media attention‚ the military indicated that its deployment of the army vehicles was a routine drill and there was no cause for alarm.

A statement issued on Tuesday night at 8pm by Information Minister Simon Khaya Moyo warned that Chiwenga’s statements were “treasonous”— and was the first official response from government.

Mugabe is at his residence in Borrowdale‚ at his Blue Roof mansion‚ with his wife Grace and is under heavy military guard.