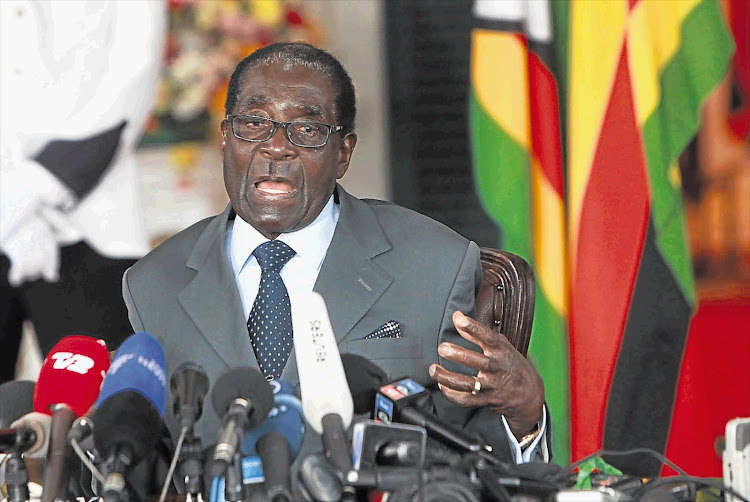 It's over! A relationship spanning over 40 years between Zimbabwean President Robert Mugabe and his former blue-eyed boy - now former Vice President Emmerson Mnangagwa - has come to an end.

A relationship spanning over 40 years between Zimbabwean President Robert Mugabe and his former blue-eyed boy - now former Vice President Emmerson Mnangagwa - has come to an end.

Conveying the message at a hastily arranged media conference‚ the minister of information and broadcasting services‚ Simon Khaya Moyo‚ said "the vice president has consistently and persistently exhibited traits of disloyalty‚ disrespect and unreliability in the execution of his duties".

Mnangagwa‚ who started out as Mugabe's chief of security during the armed struggle in 1976 was not meant to go out this way‚ at least not yet.

The head of the World Health Organization on Sunday reversed his decision to name Zimbabwe’s President Robert Mugabe as a goodwill ambassador, ...
News
4 years ago

He led a faction within the party called Team Lacoste which was fighting against another called Generation 40‚ fronted by Mugabe's wife‚ Grace. However‚ as the succession fight continued‚ it became clear that Mugabe was on his wife's side and the plan was to drop him in December at the party's extraordinary congress.

Mrs Mugabe had the liberty to openly fire salvos at Mnangagwa calling him names like "coward" and at one time an independent weekly‚ The Zimbabwe Independent‚ reported that Mnangagwa pleaded with the president to protect him from the First Lady.

But a rally in Bulawayo on Saturday was the decider. Mugabe sprang to his wife's defence when a section of the crowd heckled and booed her.

"We are rallying behind a woman to be the vice president of Zimbabwe. The only person possessing such qualities is the leader of the Women's League"

Grace Mugabe shed a tear as she took her seat at the White City stadium rally.

"Did I make a mistake by appointing him as my vice president? If I did‚ then I can fire him even tomorrow. He should go start his own party‚" a visibly angry Mugabe said as Mnangagwa looked on.

On the first day of the week's business Mugabe kept his word and fired Mnangagwa and 29 other party members aligned with him. The former vice president is now an ordinary card carrying member.

Two years‚ ago Mugabe with the help of Mnangagwa got rid of his then vice president Joice Mujuru in the same manner because she allegedly harboured ambitions of taking over from him. She went into opposition politics.

It now looks set that Zanu PF will elevate the first lady to the presidium in December.

"We are rallying behind a woman to be the vice president of Zimbabwe. The only person possessing such qualities is the leader of the Women's League‚ non other than her Excellency the first lady of the Republic of Zimbabwe‚ Dr Grace Mugabe‚" said secretary for youths Kudzanai Chipanga.

The appointment of Zimbabwe’s President Robert Mugabe as a goodwill ambassador for the World Health Organization is “absolutely unacceptable” and ...
News
4 years ago

Zanu PF’s Grace Mugabe could be well positioned to take over from her husband‚ President Robert Mugabe.Despite earlier utterances that she had no ...
News
4 years ago

The Zimbabwean embassy has withdrawn an application to intervene in the matter between South African model Gabriella Engels and Zimbabwean First Lady ...
News
4 years ago