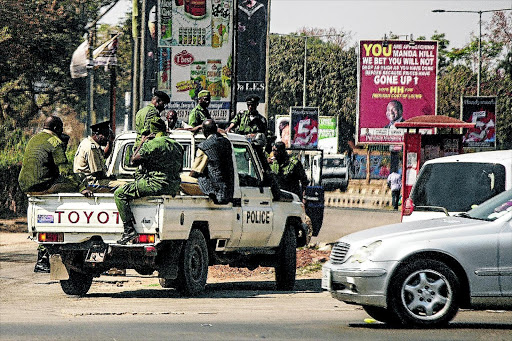 HIGH ALERT: Zambian police officers patrol the streets of the capital Lusaka after disputed presidential election results. Opposition party leaders have claimed that the results were rigged, leading to protests in the country PHOTO: GIANLUIGI GUERCIA/afp

Zambian police have arrested 133 people protesting against the re-election of President Edgar Lungu after his main opponent Hakainde Hichilema said the vote was rigged, a senior officer said yesterday.

Lungu scraped home on Monday in a tight contest to rule over Africa's second-largest copper producer, which has suffered an economic slump due to depressed commodity prices.

"They targeted perceived supporters of the ruling party, destroying their property," said southern province police chief Godwin Phiri. "It is like this was well-planned and they were just waiting for the winner to be declared. Calm has now returned following the arrests."

Zambia has been one of Africa's most stable democracies although there were skirmishes during campaigning. The kwacha strengthened 2.5% yesterday in a sign investors welcomed an outright winner in the election.

Hichilema's United Party for National Development (UPND) said it would appeal the result at the Constitutional Court, accusing election officials of fraud during the count which began after voting ended last Thursday.

"The PF (Patriotic Front) has effected a coup on Zambia's democratic process," Hichilema said on Monday.

"We submitted evidence before the declaration of the results regarding the gross irregularities that have taken place. That is why we will not accept the result."

The ruling party and the electoral commission have rejected the UPND's charge. Lungu, who can only be inaugurated seven days after being proclaimed the victor, was due to hold a celebratory rally yesterday.