US deploys troops to Chad to hunt for Nigerian girls 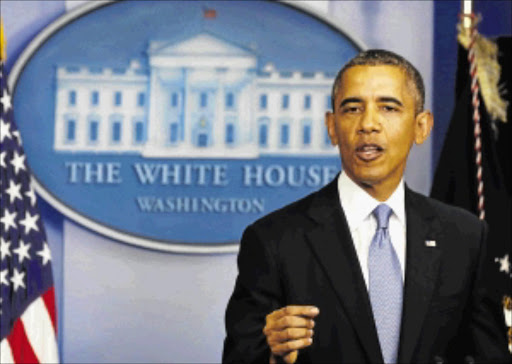 The United States has deployed 80 military personnel to Chad to help find 200 girls kidnapped by Boko Haram, who are blamed for a spree of deadly attacks this week including a massive car-bombing.

In a letter to Congress, US President Barack Obama said the military contingent would stay in Chad until their support in ending the abduction nightmare that has outraged the world "is no longer required".

"These personnel will support the operation of intelligence, surveillance and reconnaissance aircraft for missions over northern Nigeria and the surrounding area," Obama said.

The troops mark a significant boost to an existing US military effort which includes the use of surveillance drones as well as manned aircraft over Nigeria.

The Pentagon has criticised Nigeria for failing to react swiftly to the rise of Boko Haram, held responsible for thousands of deaths since 2009. Until the kidnappings Nigeria had resisted cooperation with the West in its fight against the group.

Nigerian authorities have been probing the nation's deadliest bomb attack yet, a twin car blast Tuesday in the New Abuja Market area of the central city of Jos which left at least 118 people dead and buildings collapsed.

Boko Haram has been blamed for the atrocity as well as other recent strikes near the town where the schoolgirls were kidnapped, in affronts to a security crackdown launched in response to the April 14 mass abduction.

Three more attacks, two in villages near the girls' hometown of Chibok in northeastern Borno state and one near Lake Chad, have left more than 50 people dead between Monday and Wednesday, according to witnesses.

"They began shooting and set fire to our homes. We had to flee to the bush. They killed 20 of our people," Haruna Bitrus in the village of Alagarno told AFP, in an account supported by other residents.

Washington described the Jos carnage - and a suicide car bombing in the northern city of Kano on Sunday - as "vicious attacks on defenceless Nigerian civilians".

Britain said the "cowardly, inhumane crime" would only strengthen the international community's resolve to defeat terror in Africa's most populous nation.

In Jos, where Boko Haram have attacked before, Plateau state governor Jonah Jang's spokesman said the bombing bore the hallmarks of the Islamist extremists.

"The investigation is still ongoing but this is clearly an extension of the terrorist activity that has affected the northeast of the country, the Boko Haram insurgents," Pam Ayuba told AFP.

The Roman Catholic archbishop of Jos said the insurgents were trying to sow "chaos" in the religiously divided city, hit by waves of deadly sectarian clashes over the last 15 years.

Kyari Mohammed, a Boko Haram specialist and chairman of the Centre for Peace Studies at Modibbo Adama University, said the militants were "the only ones capable of doing this".

"Every other rebel or fringe group can use bombs but not of this scale or sophistication," he added.

"I have the feeling that what they want to achieve is to escalate things because of the international pressure which has built up (because of the kidnapping)."

On the day of the mass abduction, Boko Haram also launched a car bomb attack on a bus station in a suburb of the capital Abuja which killed 75.

They are suspected of a similar attack in the same location on May 1 which left 19 dead.

Four people were killed in Sunday's attack in Kano, although it was unclear whether the attack was linked to Boko Haram.

Faced with the escalating violence, Nigeria's army announced a major new recruitment drive, with spokesman Olajide Laleye warning that fresh recruits would be sent to the frontline.

Parliament on Tuesday approved a request for a further six-month extension of a state of emergency in Borno and neighbouring Yobe and Adamawa states with the caveat that non-military means should also be explored to end the violence.

Nigerian President Goodluck Jonathan is adamant there will be no negotiations with Boko Haram on swapping the girls for militant fighters held in Nigerian jails, but the government has maintained it is open to dialogue on wider issues.

In New York, Nigeria submitted a request to the United Nations to proscribe Boko Haram as an international terrorist group.

The global attention on the plight of the missing girls has also seen specialist teams from the United States, Britain, France and Israel sent to Nigeria.

The analyst Kyari Mohammed said however that while on the one hand international pressure was forcing the government to act, it was also emboldening Boko Haram to mount further strikes.

"They have sleeper cells all over the northern part of the country and they're activating them. That's what they're going to do," he said.

"We should anticipate more attacks, especially if they (the government and the international community) are unable to solve the Chibok problem."