One person killed, over 60 arrested during five-hour raid 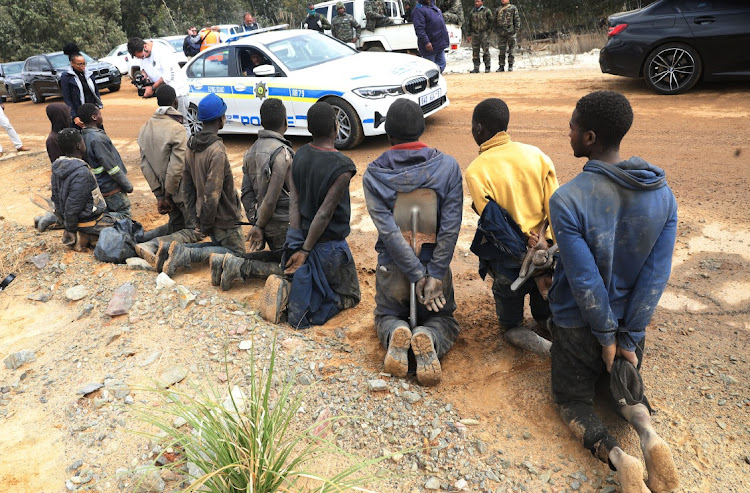 An illegal miner lay dead following a shootout with the police and about 5km away another knelt down in front of the armed police asking God to help him.

These scenes played themselves out during a five-hour police raid of the mine dumps in Krugersdorp, in the West Rand, yesterday where over 60 people were arrested for illegal mining activities.

Police officers accompanied by Hawks, crime intelligence and mining security closed roads and spread to the entire mining area situated next to West Village, a suburb of Krugersdorp, where eight women were raped last week by a group of men believed to be zama zamas – illegal miners. The operation started in West Village and ended at the corner of Battery and Main streets in Randfontein, 13km away.

One of the arrested suspects were as young as 12 years old.

Police minister Bheki Cele said Gauteng, Free State, Limpopo, North West and Mpumalanga have had serious problems of illegal mining and it needed to be met with equal force.

“We don’t have to stop. We need to keep rolling in all other four problematic provinces… just put the authority of the state and make people live normal lives.

“The situation is bad, more especially on the five. What's worse is when they go beyond this criminality (illegal mining). One woman told us a story about them (zama zamas) taking someone’s wife from the bed while sleeping with her husband and they went and raped that woman. That cannot be normal. The response must be equal to the criminality that is there… We must be there and really respond to what is happening and that response must be decisive,” Cele said.

Police closed roads leading to West Village and split into groups arresting illegal miners who were hiding in the bushes and mine dumps surrounding the dusty suburb. Some of the miners fired at police who returned fire. One miner was killed.

Specialised rescue under way at diamond mine to find trapped miners

The rescue of at least 12 artisanal diamond miners trapped in collapsed mine tunnels in the Northern Cape will be fraught with difficulties.
News
9 months ago

"Some of the illegal miners engaged and the police retaliated and one of them was fatally wounded. We called paramedics and when they arrived and turned him over they found him holding a pistol against his chest but he was already dead," said Mawela.

Later in the day, sniffer dogs were brought into the fray after a chopper spotted zama zamas armed with a rifle and pistol walking in the bushes.

Not long after that shots were fired by the zama zamas who were underground and attracted the attention of the police. More officers were brought in. Three men were arrested, two of which fitted the description of those identified by the chopper.

Maj-Gen Fred Kekana, West Rand district commissioner, positively identified one of men as the one who had been carrying a rifle but the man denied it.

Kekana forced the trio to kneel and they made the one in a pink sweater to pray.

“I praying and running back to you holy God. I’m praying to you God that you may help me,” the man prayed.

Not far from where the men were arrested were little large trenches and James table used in mining to sift the gold from the soil.

“They then wash this on James table with cloths. They then wash the cloths and rich gold-bearing material stays on the cloths. From here they go amalgamate it with mercury. After amalgamation, they use the torch to burn it and then you get your gold which is sent into the black market,” Davis said.

The focus on illegal mining activity in Krugersdorp follows the rape of eight women in West Village on July 28 who were in a mine dump to shoot a music video. Some of the women were raped by as many as 10 men believed to be illegal miners.

The heinous crime shocked the country and residents called for police to do more to end their terror  at the hands of zama zamas. A similar operation was held and over 80 people were arrested and appeared in the Krugersdorp magistrate’s court.

Of the 80, 20 were minors as young as 14. Adults in the group are expected to return to court on Wednesday having obtained legal representation. No one has yet been linked to the rapes of women in West Village.